They were only orphan children.

But over 150 years later, they still cast a long shadow. 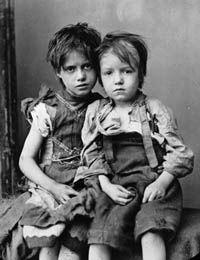 These were the children left behind in 19th-centuryVirginia City, Nevada, when their miner fathers died in cave-ins and under collapsing timber supports or in the frequent fires afflicting the Comstock Lode.

Clearly, these orphans and “half-orphans” (as single-parent children were called) needed care and schooling.

But because it was an order of Catholic sisters who came to the children’s aid, quickly mobilizing the Virginia City community, 19th-century prejudice would in the next few years become enflamed.

Eventually that enmity would take legal form — and hamstring for the next century and a half many Nevada parents’ efforts to secure quality education for their children.

The story of anti-Catholic enmity in America has its roots well before the founding of the country, in the centuries of bloody European religious wars that followed Martin Luther’s 1517 posting of his 95 theses on the Wittenberg, Germany church door.

Three-hundred years later, the new United States of America was almost entirely Protestant, with a significant proportion of its population descended from immigrants who’d fled discrimination against their own, Protestant, denominations.

Thus, when many new Irish, German and other European immigrants began entering America during and after the Civil War, deep anxieties began surfacing.

After all, nativists would point out: “Many of these people are Catholics!”

Consequently, the new citizens regularly found themselves exposed to not only unwitting discrimination, but also to virulent and official bigotry — and especially in the public schools where children’s attendance was mandatory.

School texts ranted about “popery,” “deceitful Catholics” and “lower-class Irish.” Some, in their ignorance, promulgated explicit falsehoods, such as “the Pilgrims fled from the persecution of Catholics” — when it had been the Protestant, statist, Church of England that had persecuted Pilgrims as well as Catholics.

Public schools also mandated the use in classrooms of the King James Bible. Completed in 1611, it had been crafted by 47 Church of England scholars who’d been directed by James I to ensure its translations were consistent with the structure of the state church, as well as that church’s doctrine of an ordained clergy.

The Bible with which Catholics were familiar, known as the Douay–Rheims version — published in installments from 1582 to 1610 — had been designed to uphold Catholic tradition in the face of the Protestant Reformation.

Of course, in America’s state-run public schools, the Catholic Bible was suppressed.

The result was that many Catholics organized and pushed for reforms to the state-mandated public education imposed upon them. They wanted changes that would put their schools on equal footing with the government-funded “common schools.”

But the ensuing backlash from fearful Protestants was extremely strong. Nativist 19th Century secret societies, including the Ku Klux Klan, the Know Nothings and the American Protective Association fanned the flames of fear and hatred. And two tone-deaf Italian popes — Gregory XVI (1831-1846) and Pius IX (1846-1878), of “papal infallibility” fame — did their own part to make Americans wary.

Anti-Catholicism even received an explicit White House stamp of approval in 1875. That was when President Ulysses S. Grant, in his last message to Congress, issued a warning against “priestcraft” and called for an amendment to the U.S. Constitution that would block any use of “public funds” for “sectarian” purposes.

What this meant, stripped of the obscuring political language, was that — as the U.S. Supreme Court has recognized — taxes imposed on Catholics would be used for effectively Protestant instruction of those Catholics’ children.

Grant and the politicians allied with him had found cloaking language that, given the implicitly Protestant common schools, would allow explicit state discrimination against Catholics.

It was only in his last years of life that Grant would admit that he, himself, had been a secretly initiated member of the Know Nothings.

The Sisters of Charity

In pragmatic Virginia City, however, the Catholic Sisters of Charity had already been recognized as just what the community needed.

Also known as the Daughters of Charity, it was a community of women who annually took vows to follow the path marked out by a sainted 17th century French priest, Vincent de Paul, who’d dedicated himself to serving the poor.

Their presence had been requested in Nevada by a miner and eventually legendary priest, Patrick Manogue — namesake of today’s Bishop Manogue Reno high school. He pleaded for them to come over the Sierras and help with the many difficulties faced by men, women and children in the unpredictable Mount Davidson mining-camp environment.

And indeed, in many ways the sisters were a natural fit for Virginia City.

“A large immigrant population gave a decidedly Catholic flavor to the Comstock, where Germans, French, Italians, Hispanic, Cornish, and Irish mingled in the mines,” noted the late Anne Butler, editor of the Western Historical Quarterly and a professor of history at Utah State University.

Moreover, rather than cloistered nuns, the sisters were members of a “Society of Apostolic Life” for Catholic women, the public nature of which “made these religious women uniquely suited to deal with the extreme social demands of a western bonanza town such as Virginia City,” wrote Butler in “Mission in the Mountains,” her contribution to the book Comstock Women: The Making of a Mining Community:

[F]ar from retreating from the world’s realities or expressing shock at social unrest, [the sisters] understood the complexities of Virginia City and took up a public ministry that responded on several levels. The nature of their community allowed them, unlike many religious women, to provide social services to the poor by actually leaving the convent and taking solace into the homes and workplaces of the people. The sisters expected, in accord with the recommendations of Vincent de Paul, to minister directly to the corporal needs of the sick or the suffering, while refraining from spiritual judgments in matters they might personally categorize as “sinful.” (Emphasis added.)

Arriving just as Nevada was transitioning from a territory into statehood, and well before any other social-service agencies were in place, the Sisters of Charity would, for the next 30 years, constitute a popular and vibrant source of such services, providing them to people across all religious and social categories.

[The mission’s] combination orphanage and boarding school … grew faster than the space and the funds it needed. Little by little, the sisters expanded their physical plant, but the demands always seemed greater than the available room. Within the first month the number of children attending the school reached 90. By January 1865, 20 occupants lived at the small convent; by July, 25 crowded into the small building, and 112 students attended the classes.

The overwhelming acceptance of the sisters’ school and orphanage demonstrated the dire need in Virginia City for such services. “Families in differing circumstances quickly turned to the sisters for care and education,” wrote Butler. “Mothers and fathers routinely sent youngsters for the traditional secular education and religious training.”

In the 1870s, during a nationwide anti-Catholic campaign by the nativist American Protestant Association, non-Catholic men and women in Virginia City regularly rallied to support the sisters.

… Mrs. Sunderland — an Episcopalian woman — and another non-Catholic, Mrs. Theall, undertook regular “begging” errands for the sisters. According to the [mission’s] Annals, these women, “left none of the mines unvisited” and trekked through the “most dangerous places,” to “get the last dollar.” For many years, another Episcopalian, Dr. Wake Bryarly, gave free medical care to the children at the orphanage. Additionally, the sisters enjoyed cordial relations with the Jewish community in Virginia City. Jewish girls attended the St. Mary’s School, some as boarders. At the holiday season the sisters received cash, staples, and confections from these families. Even within a religious community accustomed to secular contact, the sisters sensed that their close interaction with the Virginia City Jews made the St. Mary’s mission unique!

In Part 2: Why did state lawmakers support the orphanage and school with state financial aid?