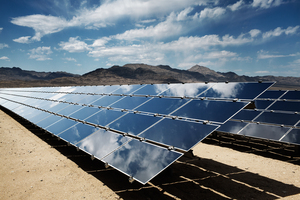 LAS VEGAS — The company behind the recently opened Silver State North solar plant is eligible to receive up to $50 million in federal tax credits under the Obama administration’s “stimulus” legislation, even though the plant created only two full-time jobs.

According to a Department of Interior memo, Enbridge Energy Partners, a Canadian-based company with extensive energy holdings in the U.S. that purchased the Southern Nevada plant from Arizona-based First Solar, “can apply for payments of up to 30 percent of the eligible costs of the project — approximately $50 million.”

The payments are available through the 1603 Program, a special exemption in the Treasury Department created by the American Reinvestment and Recovery Act to “reimburse eligible applicants for a portion of the cost of installing specified energy property used in a trade or business or for the production of income.”

Silver State North began service on Monday, May 7. Larry Springer, a community relations manager at Enbridge, confirmed to Nevada Journal the company intends to file a 1603 application for reimbursement.

As of March 2012, over 34,000 renewable-energy projects across the country have received $11.2 billion in taxpayer funds through the ARRA-funded program. In Nevada, 108 projects have received $147.1 million.

The Department of Energy estimates 5,500 full-time jobs were created by the program, meaning each job cost taxpayers approximately $2,036,363.

Silver State North was opened by Secretary of the Interior Ken Salazar on Monday and received praise from Senate Majority Leader Harry Reid back in Washington, D.C.

“This important clean energy project will generate affordable electricity for thousands of homes with no air pollution or waste production,” said Reid, a longtime champion of alternative-energy subsidies, in a statement. “Developing similar projects in Nevada should be an essential part of our future economic growth strategy.”

Silver State North’s subsidy per job is even greater than what the Copper Mountain Solar 1 plant in Boulder City received. That plant obtained $42 million in federal tax credits but only employs five full-time employees.

Geoffrey Lawrence, deputy policy director at the Nevada Policy Research Institute, the free-market think tank that publishes Nevada Journal, recently noted that Nevada’s residential electricity prices are 31.1 percent higher than they were in 2002.

Lawrence compared Nevada electricity prices to those in Texas, which has a deregulated energy market yet still manages to generate renewable energy.

“In fact, private retailers in Texas have shown that they can generate a significant share of the electricity mix using renewable sources even without government mandates,” wrote Lawrence.

“On the competitive market, advertising high renewable content has become an important marketing concept to attract customers. So, entrepreneurs have discovered innovative ways to bring renewable electricity to market in order to satisfy consumers’ desires — rather than to just satisfy government mandates.”

The White House plans to continue to promote clean-energy efforts in Nevada, with Nancy Sutley, chair of the White House Council on Environmental Quality, scheduled to visit Henderson today. In Reno on Friday, President Obama will tout his congressional “To-Do List,” which includes “invest in clean energy manufacturing.”

Kyle Gillis is an investigative reporter for Nevada Journal, a publication of the Nevada Policy Research Institute. For more in-depth reporting, visit https://nevadajournal.com/ and http://npri.org/.