LAS VEGAS — The Clark County School District has spent the past month talking up Question 2, the “pay as you go” capital-improvement ballot question, but the district’s latest efforts may have crossed a line set by Nevada’s state ethics law.

About 10 days ago, CCSD mailed out 250,000 full-color “informational” brochures to parents.

The district, which is prohibited from using taxpayer dollars to support a ballot question, did pay for the brochures, acknowledged Cynthia Sell, CCSD’s communications director, in an email to Nevada Journal.

“A brochure titled ‘Pay-As-You-Go Plan for Capital Improvements,'” writes Sell, “was produced and paid for by CCSD.”

Sell has not responded to Nevada Journal request for sales orders or invoices stating the costs of the four-color brochures.

CCSD has publicly characterized its brochures as “informational,” but included no language setting forth the case against a ‘yes’ vote.

“This is the informational brochure,” Joyce Haldeman, CCSD’s associate superintendent of Community and Government Relations, told parents attending an Oct. 9 CCSD trustee Mega Parent Advisory Committee (PAC) meeting. “It’s actually going to be mailed to homes. In fact, you might have one in your mailbox today.”

District officials have assured the public the district will not use taxpayer dollars to advocate for the question but say “it’s always important to have a Vote Yes campaign.”

“The Clark County School District does not and will not use its dollars to do a ‘vote yes’ campaign,” Haldeman told parents during the Mega PAC meeting.

“On the other hand,” she continued, “it is our responsibility to make sure people are informed about it.”

“A real nexus,” said Haldeman — as she showed parents materials advocating the passage of Question 2 and directed them to sign-up sheets — “is when we have parent volunteers who are willing to help spread the word.”

After mailing its brochures to parents, the district last Friday utilized its ParentLink system to call parents’ telephone numbers and leave messages saying:

The robotically delivered messages outraged some parents, who contacted the Nevada Policy Research Institute to complain.

Said one mother of a CCSD student, “I object to my taxpayer funds (the automated phone system) being used for political purposes. Second, I believe that the School District has unfair advantage over the opponents to this ballot question because they have unfettered and exclusive access to the phone list of all parents having children in Clark County schools… Third, I do not believe it appropriate that the School District access a database of parent numbers (that are provided for emergency purposes and issues directly related to their children’s educations) to make political phone calls.”

This past weekend, CCSD trustees held a “Yes on 2” volunteer walk, which they explicitly announced was “to distribute door hangers and yard signs to registered voters encouraging them to support Question 2.”

Using district resources, personnel, email system and databases, school board Trustees Carolyn Edwards, Deanna Wright, Lorraine Alderman and Erin Cranor sent out messages Tuesday and Wednesday, Oct. 16 and 17, advocating for the passage of Question 2, and directing parents and the public to contact the school district’s Community and Government Relations department to obtain “Yes on 2” volunteer information and campaign materials.

Said the email sent out by Edwards, Wright and Alderman:

“As a CCSD Trustee, I am able to advocate on behalf of important issues affecting our students…

“This Saturday, volunteers around Clark County will gather to distribute door hangers and yard signs to registered voters encouraging them to support Question 2. If you or anyone you know would like to participate, please call Community and Government Relations at 799-1080 or go to http://www.ccsd.net/district/capital-improvement-plan/volunteer.php. …

If you cannot participate in the walk on Saturday but would still like a yard sign, or if you would like to distribute door hangers to your neighborhood on a different day, please feel free to contact Community and Government Relations at 799-1080…

I hope you will join me in supporting this initiative…”

Nevada’s ethics law, at NRS 281A.520, prohibits both public officers and public employees from “requesting or otherwise causing [a] governmental entity to incur expense or make expenditure to support or oppose ballot question or candidate in certain circumstances.” (Emphasis added.)

CCSD told Nevada Journal on Thursday, Oct. 18, that the School Improvement Committee (SIC) political action committee will be reimbursing the district for any costs related to the materials. However, NRS 281A.520 carves out no exception — based on a private party’s later reimbursement — to its limits on public employees’ ballot initiative activities.

In contributions and expense reports through Oct. 12, filed with the Secretary of State’s office, the SIC PAC lists no expenses related to advertising, volunteers or staff, indicating the PAC has not so far paid for any campaign materials, CCSD employee time or transportation costs. The only listed expense is a June 26 payment to a Washington, D.C., polling company, Anzalone Liszt Research, which boasts of its service to Democrat campaigns. 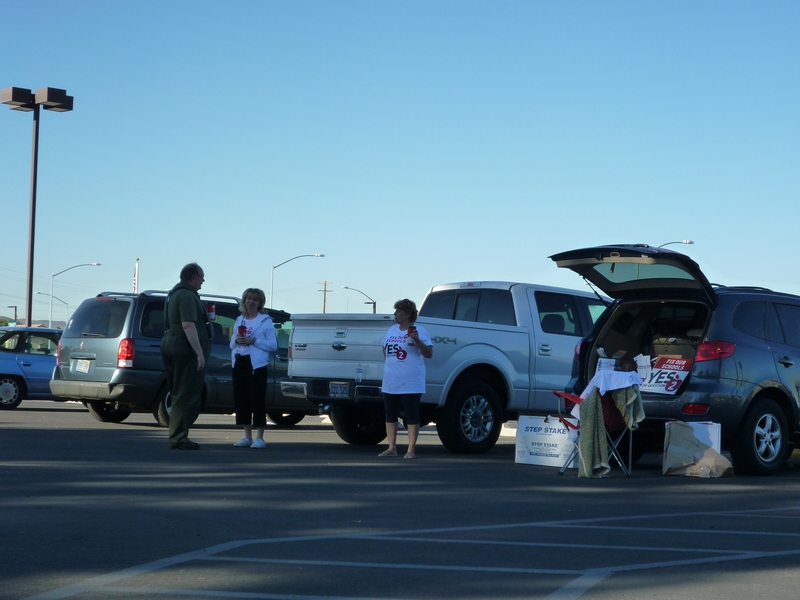 According to Caren Jenkins, executive director of the Nevada Commission on Ethics, any alleged violation would have to be brought before the Commission in an evidentiary hearing. She declined to address the lawfulness of CCSD conduct.

However, should the Commission rule that a willful violation had occurred, explained Jenkins, it could sanction the charged official or employee $5,000 and recommend removal from office.

Not only did CCSD trustees utilize district employees during the work day to answer phones and coordinate volunteers for the Saturday, Oct. 20 campaign walks, but CCSD warehouse staff, equipment and facilities were also used to load/unload, transport and store the advocacy materials, specifically, “Yes on 2” signs, T-shirts, door hangers and the “informational” brochures.

At least six pallets of “Yes on 2” materials were stored at the district’s Eucalyptus Avenue warehouse and then transported to the district’s West Sahara Avenue headquarters.

Last week, Mike McGrath, CCSD purchasing coordinator at the Eucalyptus Avenue warehouse, told Nevada Journal, “We brought [Yes on Q2 door hangers and yard signs] in here from someplace, I’m not even sure where we picked it up from, and then we were told to take it to [CCSD’s headquarters on] Sahara. 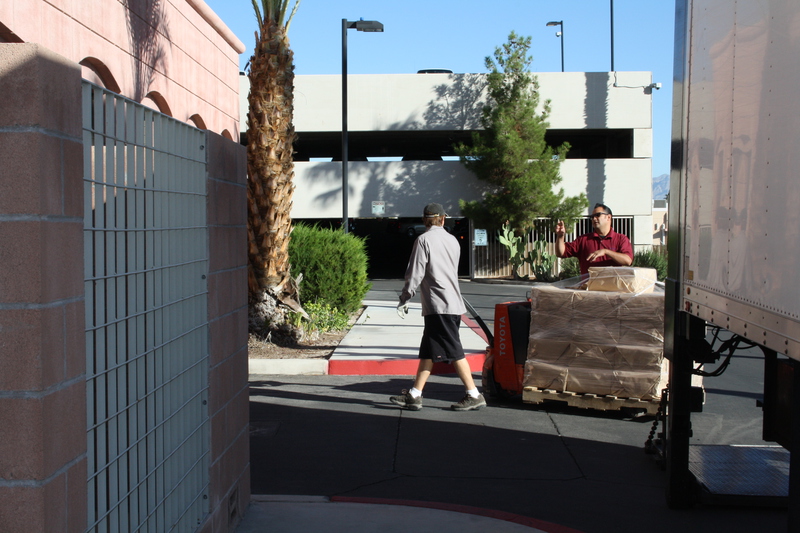 The School Improvement Committee PAC, which the district says will pay for all the campaign materials, is funded by contractors supporting the tax-increase ballot question.

Seven of the largest donors listed on contribution reports for the School Improvement Committee PAC are all construction and architecture firms currently under contract to CCSD.

Question 2, if passed, would allow the district to direct $669 million worth of new construction and refurbishment projects to its contractors.

Calls to Sandy Miller, the former Nevada First Lady and the chair of the School Improvement Committee PAC, inquiring about the PAC’s expenses, went unreturned.

After Haldeman told parents she hoped for “hundreds of volunteers” for the Oct. 20 walk, Nevada Journal contacted the district’s Community and Government Relations number and learned the parents were to meet at one of four schools to begin the walks.

Notwithstanding the directives of trustees and the transparent activities of Haldeman, she and other district officials, including Superintendent Dwight Jones, insisted the walk was to “inform” voters. Differing from the trustee statements, the invitation on the district’s website (screenshot) simply said volunteers were to “be walking local neighborhoods to answer questions about ballot Question 2.” (Emphasis added.)

In addition to district directives to principals to call parents, some principals have also asked their staff to encourage “yes” votes. A teacher from one school, requesting anonymity, told Nevada Journal that the teacher’s principal “highly encouraged” staff members to, during their upcoming parent-teacher conferences, tell parents to vote “yes” on 2.

Nevada Journal has also been informed that some high school teachers are encouraging students to join the campaign for Question 2, telling them it will count toward a class volunteer-service requirement.