Have you ever wondered why, year in and year out, the Clark County School District always seems to be short of money?

One answer frequently advanced, explicitly or implicitly, is quite simple: Nevada taxpayers are callous cheapskates, indifferent to their own children’s future.

Yet, the 17-year saga of CCSD’s highly expensive ERP adventure — where the estimated cost has ballooned from $15 million in 2001 to well over 10 times that amount today — suggests some kind of systemic problem.

Moreover, as this series will show, it’s a problem present not only in Southern Nevada but all across America’s larger school districts.

1. School district size correlates with the amount of waste and corruption

What researchers have repeatedly found is that waste, fraud and corruption flourish disproportionately in the largest school districts.

This pattern turns out to be fostered by the massive size of these districts, coupled with the inexhaustible complexity of the issues for which responsibility has been thrust upon them. These districts’ top-down, command-and-control pyramidal structures — once thought the “rational” solution by early 20th Century progressives — repeatedly have proven incapable of providing the comprehensive oversight and management that had been assumed.

What results is the effective autonomy of these districts’ divisions. And within that autonomy, central-office cultures easily emerge in which managers and staff increasingly pursue their own personal interests, using the public’s resources, while effectively ignoring their fiduciary responsibility for students’ educational welfare.

Waste, fraud and corruption then proliferate.

Both of those factors operate to keep the public uninformed regarding the actual extent within the district of fraud and corruption — much of which nevertheless remains the subject of CCSD insiders’ gossip.

Not only does the size of a district correlate with the degree that waste and corruption permeates its culture, the size also correlates with how badly that district shortchanges its young wards — the number of children who, passing through the system, emerge unable to read, write, and do math. 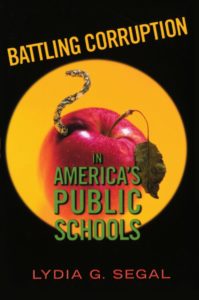 One of the primary authorities in this area is Lydia G. Segal, attorney, professor of business law and ethics at Suffolk University, and author of the widely praised and well-documented book, Battling Corruption in America’s Public Schools.

Segal — a passionate advocate for public schools — came into her expertise on school-district corruption through some unique on-the-job training. After graduating from Harvard Law, she interned in the Manhattan District Attorney’s Office, working for its Rackets Bureau chief, Edward Stancik.

A bit later, “as tales of public school jobs in New York City being sold for sex and cash filled the airwaves,” she writes, Stancik was appointed by then-mayor David Dinkins as a Special Commissioner of Investigation for the New York City Schools.

Segal became special counsel for the investigation, and for the next three years led dozens of investigations, interviewed numerous witnesses under oath and listened to multiple conversations secretly recorded by confidential informants.

“A steady stream of employees, some motivated by years of sheer frustration in dealing with the school bureaucracy, others by the wish to get even with those who had allegedly gypped them out of their share of boodle, offered secretly to record conversations with their acolytes,” says Segal.

“These conversations opened an extraordinary window into a hidden Kafkaesque world where people with starkly contrasting motivations shared criminal labels,” she writes.

“On one side of this underworld were people like some local board members who transformed their school districts into patronage mills, handing out jobs and contracts to friends, lovers, and campaign workers. These board members, who referred to themselves as godfathers and godmothers, talked primarily about making deals and getting ‘pieces,’ or patronage hires. Words such as children and education were not part of their daily vocabulary except insofar as they could be exploited as a source of patronage, power, or money.”

At the same time, also operating by necessity in the shadows, were district employees who had students’ best interests at heart but found progress impossible, in the face of regulatory obstacles and recalcitrant bureaucracies. They, too, turned to illegal workarounds.

After her three-year journey through New York’s school-fraud underworld, says Segal, she resolved to make known the problems the school system was generating and to highlight those problems’ causes by writing the Battling book.

Backed by two private foundations and expanding her focus to America’s other two largest school districts, Los Angeles and Chicago, she interviewed many school officials — some on a confidential basis — while also immersing herself in decades of reports and articles on all three districts.

3. Segal’s contribution to the empowerment-schools movement

When her book was almost completed, Segal was asked to bring her expertise to the School Design Project, led by UCLA’s William G. Ouchi and partially funded by the National Science Foundation.

Segal’s job was to analyze accountability and control in six school districts — not only New York City, Los Angeles and Chicago, but also three of North America’s most decentralized districts: Houston, Seattle, and Edmonton, Canada.

The book that resulted from the Project — Making Schools Work: A Revolutionary Plan to Get Your Children the Education They Need— has played an authoritative role in the many efforts to move the Clark County School District toward the “empowerment,” or autonomous-schools model.

Ouchi, the book’s primary author, was brought to Las Vegas in 2005 by the Council for a Better Nevada. He also testified before the Nevada Legislature then and in January 2016, when he explained why he’d asked Segal to join the project:

Many people said to me that if I pursued this idea [of autonomy for a district’s schools] and put all these state funds into the hands of individual schools, there would be graft and corruption everywhere and we would be sorry we went down that path. No one had ever tried it in the U.S.; no one knew.

So I added to my research team a faculty member from the John Jay College of Criminal Justice in New York who had been a special investigator for the District Attorney in Manhattan and who had experience rooting out waste, fraud, corruption and criminal activity in New York City schools. She came with my team of 11 research assistants when we visited Edmonton. She went through all the court records there for the last 10 years and more as well as all the newspaper files to scout out any reports of graft or corruption in the Edmonton schools that might have resulted from decentralization and autonomy.

She also interviewed many parents, teachers and school officials to see if they had ever heard of any illegal or criminal activity related to spending money now in control of the schools instead of at the central office. This process took about 1 year. She found nothing, except she did have one phone message from a woman saying she had, “something I ought to know about regarding bad goings-on in the Edmonton School District.” My investigator called the woman back and was told that the woman had been working as a parent volunteer and heard through the grapevine that there was a principal who was stepping out on his wife. That was it.

Segal was eventually listed as a contributing author on the title page of Making Schools Work, along with primary author Ouchi.

In her own book, Battling, Segal brings forward a remarkable fact long obscured, or even evaded, regarding the exact locus of America’s education failing. After noting some of the widely reported negative trends in American education, she observes:

While such overall trends are distressing, the problem with American education is in our great city schools, particularly the inner city — not in suburban or rural schools, many of which are successes by most measures.(Emphasis added.)

It is [she continues] in cities such as New York, Chicago, Los Angeles, Detroit, and Philadelphia where the largest numbers of children cannot read, write, and compute at acceptable levels and where racial gaps between whites and blacks and Latinos are widest. It is in large cities that minority boys in particular, trapped in poor schools, have the greatest chance of flunking out and getting sucked into the downward spiral of crime and prison. Public-school pupils from large cities are also less likely to take college entrance tests such as the SAT than pupils from the rest of their state. If they do, they tend to score lower than state averages.

Writing in 2005, Segal noted that per-pupil spending on public education in the past three decades had soared, with big-city school bureaucracies growing disproportionately. Nevertheless, in the last decade, “virtually no large city school districts” had shown improvement in its math and reading scores.

And while some individual schools here and there have made amazing turnarounds, she sides with Diane Ravitch and other scholars who point out that none of these individual successes have ever been translated into districtwide improvement.

Generations of ostensible education reformers bear some responsibility for that failure of broad reform, she suggests, because reformers have almost ostentatiously avoided studying school-district corruption:

One impediment to reform that no one is seriously studying in the debate over how to improve public schools is systemic fraud, waste, and abuse. This omission is surprising because a number of school districts, particularly large urban ones, have compiled impressive records of fraud and waste.

Yet, she points out, “Most education experts gloss over school corruption records as if they were irrelevant or at best incidental to education reform.”

What such presumed experts miss, Segal argues, is that school corruption and school failure are interwoven — and the consequences fraud and waste have on learning can be devastating:

The most academically beleaguered school systems tend to be the ones with the longest, most serious, most systemic investigative records. Districts such as Jersey City and Newark, New Jersey, Roosevelt on Long Island, and Lawrence, Massachusetts, where chronic academic failure has prompted state takeovers, revocation of school licenses, and other drastic measures, have also been plagued by theft, fraud, waste, and mismanagement. Their records are in stark contrast to those of more academically successful urban districts such as Houston, Seattle, and Edmonton, Canada, where the incidence of waste and abuse is far lower and the severity is less.

The same pattern can be seen within school districts, too, Segal notes. She observes that during the period that New York City’s public school system was divided into 32 local community school districts, the local school districts with the most cases of corruption also tended to rank lowest in math and reading scores.

On the other hand, local districts with the highest test scores had the fewest such cases.

How does it happen that corruption leads to failure in student academic achievement?

It happens in many ways, says Segal:

Segal observes that while the reflex of some experts is to dismiss corruption scandals “as mere surface rashes” on the skin of a school system, such “rashes” really signal malignant carcinomas upon a district’s fundamental mission.

This is, she writes:

Index to the entire eight-part series