LAS VEGAS — As Harry Reid in 2009 was assembling the liberal wish-list that would eventually be passed into law as Obamacare, he rarely missed any opportunity on the floor of the U.S. Senate to lambaste “greedy insurance companies.”

Behind the scenes, however, the Senate majority leader, his committee chairmen and his aides were diligently stuffing into that legislation lucrative favors for that very same insurance industry.

Chief among those favors was the bill’s unconstitutional decree that every individual American — like it or not — must henceforth become customers of those very same insurance companies.

A second big favor in the bill for the industry was a provision requiring over $1 trillion in subsidies for such insurance purchases over the next decade alone.

And there were more such favors, some of which just now are getting full media attention.

But you wouldn’t have known about any of these subsidies in 2009, to hear Reid, Nevada’s senior senator, repeatedly reciting his mantra of “greedy insurance companies.”

Thus, on June 11, arguing for the “public option” — a Medicare-for-all scheme, which ultimately couldn’t even pass Reid’s own Democrat-dominated Senate — Nevada’s senior senator said that a “primary benefit” of that approach was that it would allow people “to get their insurance from someone other than a greedy private insurance company.”

A week later, on June 18, Reid was accusing Senate Republicans of offering “many amendments that simply would give greedy insurance companies the ability to deny coverage whenever they feel like it.”

On July 8, he asserted that, “right now, insurance companies that care more about profits than about people are … holding Americans hostage,” and promised that Democrats “are no longer going to let greedy insurance companies use a patient’s preexisting condition as an excuse to deny them the care they need.”

But there’s a key distinction here that Reid always ignores: Insurance is what individuals purchase to protect against as-yet unknown risks. Auto insurance is an example: it’s purchased for protection against the catastrophic financial damages that could occur at some unknown time down the road.

Homeowner insurance is similar: It is only sold when catastrophic damage is possible, but not highly probable.

Until recent decades, health insurance, too, was similar. It was to hedge against the unforeseen, notes Geoffrey Lawrence, director of research and legislative affairs at the Nevada Policy Research Institute, which publishes Nevada Journal. People already having known medical conditions were clearly recognized as not insurable.

Increasing governmental control of the health insurance market, however, has driven almost everyone into third-party payer arrangements — employer insurance, Medicaid or Medicare. So politicians can get away with conflating health insurance and health care.

Thus Nevada’s senior senator, in the December 2009 run-up to the party-line Senate vote that would pass the Obamacare legislation, was again railing again against “propaganda by the insurance industry.”

“They want you,” he said, “to think the American people are happy when these greedy insurance companies deny health care to the sick and take away their coverage at the exact moment they need it the most.”

And again, on the Christmas-eve passage of the Senate’s largess for the insurance industry, Reid was still posturing, proclaiming, “We will stand up to those greedy insurance companies that deny health care to the sick and drive millions into bankruptcy, foreclosure, and sometimes even worse.” 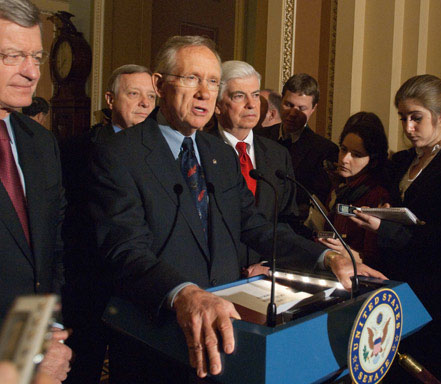 Through all of his 2009 railings, the majority leader kept ostentatiously ignoring what all Washington-Beltway denizens knew full well: That the big insurance companies were actually leading the charge for Obamacare and had written the key provisions that Reid was pushing toward passage.

Those provisions had come directly out of the senate Finance committee, chaired by then-senator Max Baucus, D-Montana. The health-insurance industry had just the previous year underwritten his re-election campaign with well over $1 million in donations.

“The Senate bill, you know, frankly, is just an insurance company bill,” he said.

The insurance companies, actually, literally did write it. There were two senior staffers in Max Baucus’s office, one who used to work for United Health Care and one who used to work for WellPoint, who wrote the bill. It’s a great bill from the insurance companies’ point of view. It doesn’t happen to do a whole lot to change the system and to bring reform.

In a highly scripted and choreographed public meeting, AHIP’s president and chief lobbyist, Karen Ignagni, had stood up and assured President Obama and a crowd of Beltway politicos that her organization was “committed to change” and to “restructuring” American health care, “and “committed to actually helping to get this done,” adding:

We hear the American people about what’s not working. We’ve taken that very seriously. You have our commitment to play, to contribute, and to help pass health care reform this year. (Emphasis added.)

“That’s America’s Health Insurance Plans,” he told the assembled audience, just in case any had missed the significance of what had just happened. The audience then dutifully applauded.

This was all in March 5, 2009 — well before Reid’s months of declarations from his Senate podium about protecting Americans from “the greedy insurance companies.”

In actual fact, Reid and his Senate allies were scurrying to give “the greedy insurance companies” exactly what they’d demanded.

AHIP had been very clear with the Senate and Obama administration insiders that its support for the so-called “health reform” was entirely conditional: The industry would not fight Obamacare if the industry was given a direct, federally guaranteed pipeline into Americans’ pocketbooks.

In other words, citizens of the United States could no longer remain free to not purchase industry health-insurance products. Lawmakers would have to write legislation legally compelling everyone to buy from the industry.

This was the origin of the infamous “insurance mandate.”

That element of coercion — which the U.S. Supreme Court would later rule unconstitutional as a direct order, while accepting it as a tax penalty — thus became one of the big hunks of mystery meat that Reid and his committee chairmen were stuffing into their Obamacare  sausage.

But much more mystery-meat stuffed into the law has only recently drawn public attention.

Multiple provisions — included in the law by Reid, Baucus and the party-line Democrats who passed it — were designed to allow the insurance industry to socialize its risks while privatizing profits.

Those risk provisions are in Part Five of PPACA (now 42 U.S.C. 18062) and deal with “reinsurance,” “risk adjustment” and “risk corridors.”

Section 1341 of the law, “reinsurance,” levied a tax — the amount and method of calculation to be determined by the federal secretary of Health & Human Services — on all health plans during 2014, 2015 and 2016. Collected, that money gets allocated to the health insurance companies that spent over $60,000 on single Obamacare patients in a year. Thus, financial risk is socialized across the entire health-insurance industry.

Section 1343, “risk adjustment,” levies another charge on health plans and companies if their enrollees are calculated to pose less actuarial risk, on average, than all enrollees in their state. The idea is to keep health insurance companies from positioning themselves in the marketplace in ways that allow them to primarily attract healthy, low-cost patients. Thus, if a plan turns out to be covering healthier people, it must transfer funds to plans covering sicker people. This program, too, runs for three years.

Section 1342 of PPACA, “risk corridors,” differs from PPACA’s reinsurance and risk-adjustment schemes in a significant way: While those programs have guaranteed funding streams, the risk-corridor program has none. And that means that Harry Reid’s Senate and Nancy Pelosi’s House screwed up big-time.

Long-standing federal rules require that Congress, in order to properly pay for a program, must 1) identify the federal source from which the funds must come and 2) identify how the payment in question would be authorized.

However, the PPACA legislation failed to do either.  And though it was badly drafted, Reid and Pelosi had nevertheless rushed the bill — gaps, warts and all — through both houses of Congress in early 2010.

That was just before the newly elected senator from Massachusetts, Republican Scott Brown, was about to fill the seat of the late Ted Kennedy — and deprive Sen. Reid of his filibuster-proof Senate super-majority.

What had been the idea behind the risk-corridor program? It was to allow insurance companies to lure patients into Obamacare with the bait of premiums initially set very low.

But the insurance companies had wanted protection from the risk of losses, should these patients turn out to require more medical care than those low premiums would cover. So Reid’s Senate bill drafters, once again, planned to levy charges on insurers that spent less on patient health care and give that money to insurers that spent more.

Reid’s Senate bill drafters, however, forgot to actually write appropriation language into that section of PPACA. As the U.S. Government’s Accountability Office said in a Sep. 30 legal decision, “Section 1342 did not enact an appropriation to make the payments to the qualified health plans.”

The GAO went further, citing the U.S. Constitution’s requirement, in Article 1, Section 9, that federal agencies may only incur obligations and make expenditures as permitted by explicit Congressional appropriations.

Further, said the GAO, “The making of an appropriation must be expressly stated in law… It is not enough for a statute to simply require an agency to make a payment…. Section 1342, by its terms, did not enact an appropriation to make the payments specified in section 1342(b)(1).”

This is not merely a legal issue. Already observers are noting that certain health-insurance companies appear to be under-pricing their new insurance offerings in a bid to gain market share.

Given Obama administration signals that it intends to find a way, without any Congressional appropriations, to bail out insurance companies that dig themselves into this particular hole, it makes a twisted kind of sense.

But it also raises the specter of America’s new, rent-seeking and corporatist insurance industry eagerly rushing to grab market share and demand what would be large-scale federal bailouts to pay for their big bets.

Once again, Main Street taxpayers could very well end up on the federal bailout hook.