LAS VEGAS — Throughout the media firestorm over the Affordable Care Act’s botched October rollout, nearly all attention has been on implementation failures of the Obama White House and the federal Department of Health and Human Services.

What’s received little mention, however, is the central role of Nevada’s Harry Reid, majority leader of the U.S. Senate, in the crafting of the federal law at the root of all the national turmoil.

That legislation is now seen by opponents of Obamacare as the gift that keeps on giving — presenting them, many believe, with an increasingly good chance of the law’s ultimate repeal, whether in essence or in fact.

Gift No.1, in this view, was how Reid’s legislation inadvertently teed-up the Obama White House and its HHS team to allow both to demonstrate — in a highly public and embarrassing way — serious administrative incompetence.

That was because the three key pieces of Obamacare legislation that Reid forced through the Senate, each time on strict party-line votes, basically consisted of provisions delegating to the Secretary of Health and Human Services all the implementation responsibilities for the massive program.

Basically, the legislation said, “We here in the Senate have some ideas on how to rejigger one-sixth of the American economy, but we’ll be leaving the details to you and the White House.” 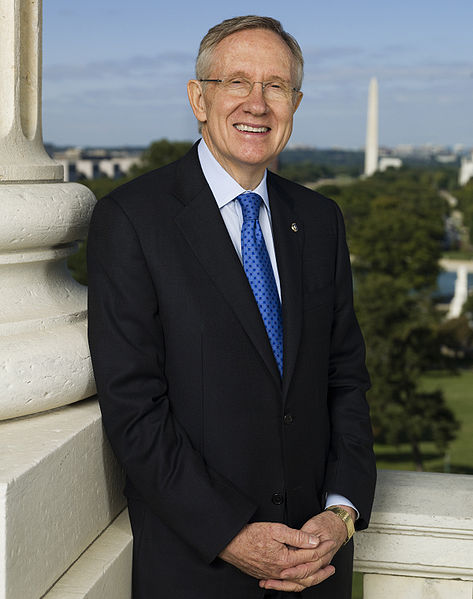 That’s why — within the approximately 2,700 pages of the bill put together by Reid, his lieutenants and his staff — the phrase, “the Secretary,” appears 3,120 times.

According to the ranking member on the Senate Committee on Finance, U.S. Sen. Chuck Grassley, the Reid bill on 1,697 occasions authorized the HHS Secretary to write additional regulations beyond those already specifically requested in the legislation.

One new HHS regulation provided administration opponents with Gift No. 2. That was the revelation — which reached millions of people in October as their individual health-insurance policies were being canceled — that President Obama, during the four years of “promises,” had been deceiving them.

For that, the Washington Post Fact Checker page ultimately “awarded” him four “Pinocchios, its maximum — a rating the page says is reserved for “whoppers.”

Four sources deeply involved in the Affordable Care Act tell NBC News that 50 to 75 percent of the 14 million consumers who buy their insurance individually can expect to receive a “cancellation” letter or the equivalent over the next year because their existing policies don’t meet the standards mandated by the new health care law. One expert predicts that number could reach as high as 80 percent.

Moreover, while the law Reid shepherded through the Senate allowed insurance policies in effect as of the law’s final passage to be temporarily “grandfathered-in,” it also gave HHS authority to essentially negate that provision — which HHS immediately did.

Thus, as early as June 17, 2010 — less than three months after Barack Obama signed the law, with Harry Reid smiling broadly behind him — HHS was publishing “interim final rules” in the Federal Register and mentioning that a 2008 study estimated that under similar rules, “40 to 67 percent” of customers in the individual-insurance market will lose their policies.

However, HHS added, the percentage of such policy holders who will lose their policies will most likely end up even higher than 67 percent. That’s because of other regulations the department would be imposing, it said.

Initially the Obama administration said the reason people were losing their policies and/or suddenly being hit with huge price increases was because their policies were substandard. However, that rationale didn’t hold up very long, as the full story began emerging.

For example, Kathy Kristof of CBS MoneyWatch shared with the public her own experience of seeing her premiums spike 66.5 percent, for a policy significantly inferior to her previous, non-Obamacare, policy:

The promise that you could keep your old policy, if you liked it, has proved illusory [she wrote]. My insurer, Kaiser Permanente, informed me in a glossy booklet that “At midnight on December 31, we will discontinue your current plan because it will not meet the requirements of the Affordable Care Act.” My premium, the letter added, would go from $209 a month to $348, a 66.5 percent increase that will cost $1,668 annually.

What made my plan too substandard to survive under Obamacare? It did not provide maternity benefits. I’m 53 years old. I figure pregnancy would require an act of God. (Incidentally, maternity benefits will be covered on men’s policies too. Let’s hope medical science comes a long way so you guys can use those benefits.) My policy also did not cover substance abuse treatments or psychiatric care.

The deductible for her old plan was $5,000 — which, once paid, protected her entirely “from economic devastation in the event of a catastrophic illness, such as cancer,” Kristof wrote.

Under the new Obamacare policy offered her by Kaiser, however, while the deductible was annually $500 less, the policy “covers only 40 percent of medical costs for office visits, hospital stays and drugs.” And that was Obamacare’s bare-bones, “bronze” policy, she notes, adding that “Premiums for plans that offer lower deductibles and premiums would cost almost twice as much, according to the Kaiser booklet.”

When Kristof touched base with Avik Roy, a health care expert and senior fellow at the Manhattan Institute, he told her that a “standard policy for wellness and catastrophic coverage for an unexpected, unavoidable ailment or accident could have been provided for a fraction of what Obamacare coverage costs.”

“Obamacare,” said Roy, “forces insurers to offer products that carry all sorts of bells and whistles that most people don’t want but everyone will now need to pay for.”

“The big problem” with Obamacare, said Marlon, “is that the insurance market is now larded over with … all kinds of mandated benefits,” adding as much as 40 percent to the cost of an insurance policy.

“They didn’t think it through,” he said, referring to the Obama administration. “Let’s just assume that the average policy that Obamacare is selling … is larded up with 30 percent of mandated benefits. Maybe it’s as high as 40 percent.

“If you had reduced those mandates, you wouldn’t have to do some of these other nutty things they’re doing to try to get people into the marketplace.”

However, all of those mandated extra benefits that people won’t use turn out to be a critical element for the Obamacare program.

As Roy told Kristof, “This is a redistribution of wealth from the healthy to the sick, from the young to the old, from the people who have always had insurance to the uninsured,”

In short, Obamacare — as crafted in the U.S. Senate by Nevada’s senior senator and a handful of Democratic senators — appears primarily a scheme to camouflage a heavy new tax on America’s struggling middle class and then transfer the new revenues to others.

In addition to the ostensibly needy, those “others” turn out to include the politically active big players in the medical-industrial complex, such as the health-insurance and pharmaceutical industries. A Frontline investigation produced by the Corporation for Public Broadcasting documents the deal made by the Obama administration with the insurers.

Because the Obama administration and the Democrat-controlled U.S. Senate had promised Americans that Obamacare would reduce their health-insurance premiums, the actual financial impact of the program appears likely to be Gift No. 3 to Obamacare’s foes.

In 2009 and 2010, polls consistently showed that most people feared that passage of the Senate legislation would make health care even more expensive. White House Chief of Staff Rahm Emanuel even sought to use that fear of higher prices to flog Congress over the ACA finish line.

“By focusing on escalating insurance rates, especially for the sliver of the market in which people buy health coverage individually, the administration is emphasizing that costs will increase if Congress does not act,” reported Washington Post staff writers Amy Goldstein and Scott Wilson.

“Part of the motivating factor here,” said Emanuel, “is letting members of Congress know there’s a price to pay for failure. And for the public, it’s important to remind them that there are premium increases of 40 percent for as far as you can see if nothing is done.”

Harry Reid, also, portrayed the legislation he was pushing through the Senate as something that would make Americans’ medical costs far less expensive.

“We have the ability to treat our unhealthy health care system,” he said on the Senate floor Dec. 21, 2009, three days before forcing passage of his bill late on Christmas Eve and on a strictly party-line vote. “That is what this historic bill does. It protects patients and consumers. It lowers the cost of staying healthy and greatly reduces our debt…

“Contrary to what we heard from my distinguished friend, the Republican leader [Mitch McConnell], premiums are reduced by 93 percent. Ninety-three percent of people who have insurance will have reduced premiums.” (Emphasis added.)

Indeed, Reid has regularly assured Nevadans over the years, in his almost-daily press releases, that his leadership in the Senate was producing lower insurance costs for them.

Yet, all indications are that what Obamacare really means for most Americans is big increases in their health-insurance premiums, coupled with inferior coverage. A big proportion of the country will be paying more, but getting less.

For example, a 2009 analysis done for Nevada by WellPoint, Inc. — a licensee of the Blue Cross Blue Shield Association — projected 115 percent increases in premium costs for younger, healthier individuals and 61 percent premium cost increases for individuals of average age and health.

Older and less-healthy individuals were expected to see modest reductions in their premium costs — 11 percent for people in the individual market and 26 percent for those working for small businesses.

Interestingly, the analysis provides charts revealing the extent the higher premiums being charged the young and middle-aged are designed to subsidize the elderly and the less-healthy.

More recent information also indicates much higher costs for most Americans. As reported earlier by Nevada Journal, individual-market plans in the average state face a premium increase of 41 percent. However, the Silver State, according to data crunching by analysts at the Manhattan Institute, has the dubious distinction of facing the steepest such increase.

Thus, the average increase facing Nevadans for their Obamacare-imposed insurance-policy premiums calculates out at over four times that national average, coming in at 179 percent.

Charles Ornstein, of the left-leaning, award-winning Propublica news site, reports he’s been skeptical “about media stories featuring those who claimed they would be worse off because their insurance policies were being canceled on account of the ACA.”

However, when he heard such a story from a San Francisco architect and his wife, he found what the couple told him was entirely accurate.

The healthy couple had been paying Kaiser Permanente $550 a month for good-quality health coverage. Then, a letter from Kaiser arrived, telling them that, in accord with Obamacare, they would be enrolled in an inferior plan that would cost them nearly $1,300 a month.

“And for that higher amount, what would they get?” asked Ornstein. The answer was: “A higher deductible ($4,500), a higher out-of-pocket maximum ($6,350), higher hospital costs (40 percent of the cost) and possibly higher costs for doctor visits and drugs.”

“What is going on here?” Ornstein wondered. Contacting Kaiser Permanente, he was fortunate enough to speak to a candid, knowledgeable spokesman who had previously worked for the federal HHS. However, his answers aren’t at all reassuring.

“There’s an aspect of market disruption here that I think was not clear to people,” the spokesman acknowledged.

“In many respects it has been theory rather than practice for the first three years of the law; [now] folks are seeing the breadth of change that we’re talking about here.”