Ratepayers tapped for a $4.4 million early Christmas gift to City of Las Vegas 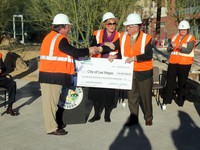 LAS VEGAS — NV Energy officials presented the City of Las Vegas with a $4.4 million rebate check Tuesday, but it was state ratepayers who were actually funding the check.

So far, $113 million has been paid out for more than 1,300 solar projects across the state under the electricity monopoly’s “SolarGenerations” program, according to spokesman Tony Sanchez.

The program was established under NRS 701B, a mandatory solar-energy incentives law passed by state legislators in 2007, and then amended in 2009.

It funds the incentive checks through dollars the state Public Utilities Commission allows NV Energy to take from general ratepayers under NRS 701B.230 (4).

Las Vegas is the largest government recipient so far, having received more than $7.4 million in rebates. Tuesday’s $4.4 million was a reward for installing 33 solar “trees” — metal poles with solar panels on top— in front of the new City Hall building.

“These trees artistically demonstrate the city’s commitment to renewable energy,” City Manager Betsy Fretwell said during the presentation. The city reportedly spent $8.2 million on the solar trees and on additional solar panels at 16 different city facilities.

According to NV Energy’s Sanchez, other facilities benefiting from the solar rebates include eight fire stations, Centennial Hills Community Center, Lorenzi Park, and the East and West Service Centers.

Economists, however, point outthat jobs government claims to “create” in one area merely re-route dollars that would have generated jobs in other areas, had those dollars been left in the private sector.

The new City Hall is currently LEED-certified “silver,” meaning it achieves a certain point totalin categories such as sustainability and indoor environmental quality, said Mayor Carolyn Goodman. She predicted the building would receive “gold” certification by next year.

In the case of renewable energy, however, taxpayer investment frequently doesn’t produce positive long-run results while instead hindering the growthof private-sector investments.

Other projects, such as Solyndra, become political fiefdoms attached to the government,and taxpayers are left footing the bill when, as frequently happens, government’s investment fails.

Behind such instances, says Geoffrey Lawrence, deputy policy director at the Nevada Policy Research Institute, is a tactic he describes as “rent-seeking cronyism.”

“Solyndra’s business model — like that of many ‘renewable’-energy-component manufacturers — doesn’t achieve success by producing goods that consumers value and would purchase freely,” wrote Lawrence. “Instead, this business model achieves success by petitioning politicians to legally compel consumers to purchase the company’s product.”

“These [renewable energy projects] are examples of what this city is trying to do,” Goodman said at her press conference. “Public-works projects are near and dear to my heart, and projects like these will help lower the city’s energy bill.”

Goodman touted the new hall as a beacon for the “new downtown Las Vegas” and the city’s commitment to renewable energy.

“[Las Vegas wants] to be a leader when it comes to sustainability in this state,” Goodman said. “We’re going to set a good example with this building and our other green projects.”

The new City Hall is expected to open officially on Feb. 27, with a ribbon-cutting ceremony on March 5.

Kyle Gillis is an investigative reporter with Nevada Journal. For more visit https://nevadajournal.com and http://npri.org.