Speaker Oceguera got more double-dipping pay than he claimed

Assembly Speaker and North Las Vegas Assistant Fire Chief John Oceguera has repeatedly insisted publicly that he worked and was paid by the City of North Las Vegas for “only” nine hours a week during this year’s legislative session in Carson City when he was also being paid as a Nevada legislator.

In an interview with Nevada Journal, Oceguera said, “I was paid for nine hours a week [during the session] and the rest of the time was accrued vacation or furlough time, meaning I did not get paid.”

Oceguera’s boss, Fire Chief Al Gillespie, repeated the same talking points in television and print interviews and a letter to the editor published in the Las Vegas Review-Journal. “During the legislative session,” asserted Gillespie, “Oceguera was paid for only nine hours of work a week, and for the rest of the time he was on either unpaid leave or used accrued vacation time.”

The fire department also produced an agreement between Oceguera and the City of North Las Vegas, which states he would only be paid for nine hours a week during the session. 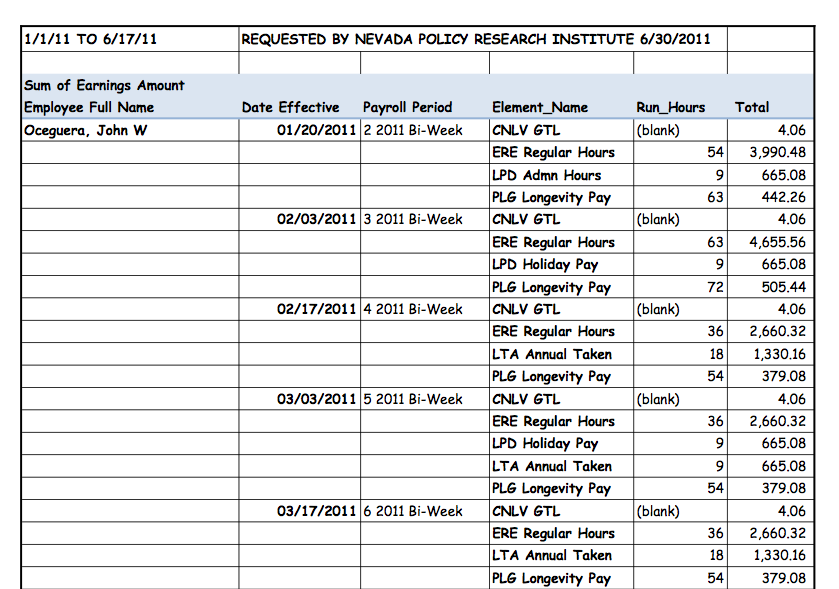 The records indicate that during the 2011 Legislature, Assistant Fire Chief Oceguera spent almost twice the number  of days on the city payroll as he previously said.

For most of the session, Oceguera was being paid by the city at the 18-hours-a-week rate. This was twice the rate specified in the repeated public statements by Oceguera and Gillespie and by the badly written agreement given to the media by the fire department.

At the same time, in his second government job as an assemblyman, Oceguera was drawing legislator pay, per diem pay and leadership pay.

On June 28, after Nevada Journal first began investigating this issue, Oceguera denied the accuracy of the North Las Vegas Fire Department staffing records obtained from the department by Nevada Journal.

Those records, given up in response to a public-records request, regularly credit the speaker with 36-hour work weeks for the last four years, whether he was leading his fellow Democratic legislators in Carson City, or was in his North Las Vegas office.

Oceguera contended that city payroll records were more accurate and would bear him out. They would show, he argued, that during the 2011 Legislature he had only worked nine hours a week for the fire department — using holiday and annual leave, or unpaid leave, for most days of the 2011 Legislative Session.

Fire Chief Gillespie, too, when interviewed denied the accuracy of his own department’s staffing-log records and asserted that the city’s payroll records were more precise.

Gillespie then released to news media purported agreements between the fire department and Oceguera for the 2009 and 2011 legislative sessions. The documents spelled out nearly identical fire-department duties for Oceguera during each session.

However, the payroll records, when released July 12 by the North Las Vegas City Clerk’s office, show that during most two-week pay periods during the 2011 session, Oceguera received 18 hours of pay a week.

Sent the city payroll record July 20, and asked about its different numbers contradicting his account of his pay during the session, Oceguera initially said that the city records didn’t make sense to him and that he didn’t recognize many of the pay or benefit acronyms on the document.

“I’m just being straight up with you. I don’t understand this sheet,” he said, adding that “I may be able to get some more clarity after I talk to somebody who can explain this.”

Credibility issues increasingly beset NLV fire department records and administration accounts of those records. Not only has senior management sought to discredit the work-roster logs, but the city’s timecard software system was also revealed as questionable when Oceguera sent a screen-shot from the software showing a two-week period in May 2011.

The entries showed him using unpaid furlough for May 11 and 12, and annual leave for May 16 through May 19 — in contradiction of the staffing records. However, the same screen shot showed him to have been paid by the city for nine hours on Monday, May 9 and another nine hours on Tuesday, May 10. On both days he was in Carson City.

According to the journal of the Nevada Assembly, on May 9 Oceguera was presiding over that chamber. Also on that day, according to Senate minutes, he testified before the Senate Education Committee. On May 10, he again presided over the Assembly, later speaking to reporters as Assembly Democrats passed their proposed education budget.

On June 28, Oceguera attempted to explain the discrepancy between his publicly recorded activities and the work schedule reported by the city’s timecard software system as merely errors that had been entered into the software for “ease of coding.”

However, that raises the question: Just how much is the “easy way” the norm in the North Las Vegas Fire Department?

As both Gillespie and department public relations chief Cedric Williams have emphasized, for top brass in the department, “there are no timesheets or clocking in and clocking out.”

Steven Miller is the managing editor of Nevada Journal, a publication of the Nevada Policy Research Institute.