LAS VEGAS — The Obamacare-linked expansion of Medicaid in Nevada that Gov. Brian Sandoval and state lawmakers pushed into Nevada law this year is likely to reduce Silver State employment, suggests a new working paper from the National Bureau of Economic Research (NBER).

A trio of scholars — Craig Garthwaite of Northwestern University, Tal Gross of Columbia University and Matthew J. Notowidigdo of the University of Chicago — examined the job-seeking behavior of individuals demographically similar to those Nevadans who will become eligible under the Sandoval-led Medicaid expansion for new taxpayer-supported medical subsidies and services.

Specifically, the individuals examined by the NBER study were participants in TennCare, the Tennessee Medicaid program, in the early years of this century.

That program had undergone an expansion in 1994 similar to that now planned for Nevada. Then, 10 years later, that expansion was rolled back. The reason: ever-escalating cost overruns.

What was particularly unique about the 1994 TennCare expansion, however, say the NBER authors, was that it had lacked a specific income requirement.

“To our knowledge,” they write, “all previous expansions of public health insurance have placed strict limits on the total income qualified beneficiaries can earn.

The Medicaid expansion — support for which Sandoval announced last December — was optional for Nevada. In June 2012, the U.S. Supreme Court had ruled unconstitutional the attempt by Democrat majorities in the 2010 U.S. Congress to compel states to expand Medicaid eligibility.

Now, Silver State residents with incomes up to 138 percent of the federal poverty level — most of them able-bodied adults with no dependent children — will be eligible for the Medicaid subsidies.

In Tennessee, after that state concluded that the extra costs of such expanded eligibility were unsustainable, TennCare “disenrolled” — that is, stopped covering — adults over the age of 19 who didn’t qualify for traditional Medicaid.

Tennessee then saw a remarkable increase in employment, different from the other Southern states — suggesting that many TennCare beneficiaries up to 2005 could have worked but didn’t.

“The 2005 TennCare disenrollment,” write the NBER authors, “was the largest decrease in publicly provided insurance coverage in American history…

“Despite the size of the TennCare disenrollment, it remains a relatively understudied phenomenon. In the economics literature, to our knowledge, no authors have examined this policy change.”

The demographics of those disenrolled from TennCare, say the white paper’s authors, suggest that disenrollment can shed light on how individuals newly eligible for Medicaid under Obamacare will behave.

“On some dimensions — particularly the presence of children in the home — this empirical setting is more similar to the ACA [Affordable Care Act, i.e., Obamacare] than other previously studied reforms,” they write.

Commensurately, the authors write, when residents of Tennessee without dependent children suddenly in 2005 began losing their previous Medicaid coverage, “Tennessee experienced a sudden employment increase that the rest of the south did not experience.”

Figure 12, from the study, charts this sudden increase graphically: 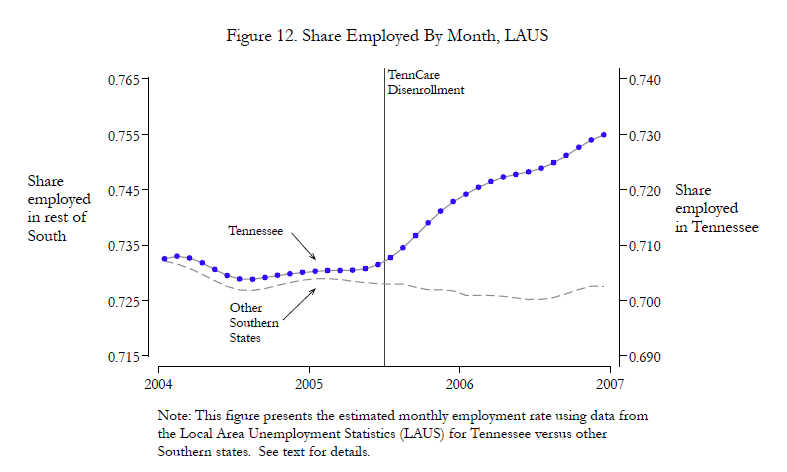 Figure 5, from the study, “presents trends in employment across Tennessee and other Southern states, with the CPS [federal Current Population Survey data] sample split based on whether the respondent is a childless adult. The figure demonstrates that the employment increase seen in Figure 4 is driven by a sudden break in trend for childless residents of Tennessee after the TennCare disenrollment.” 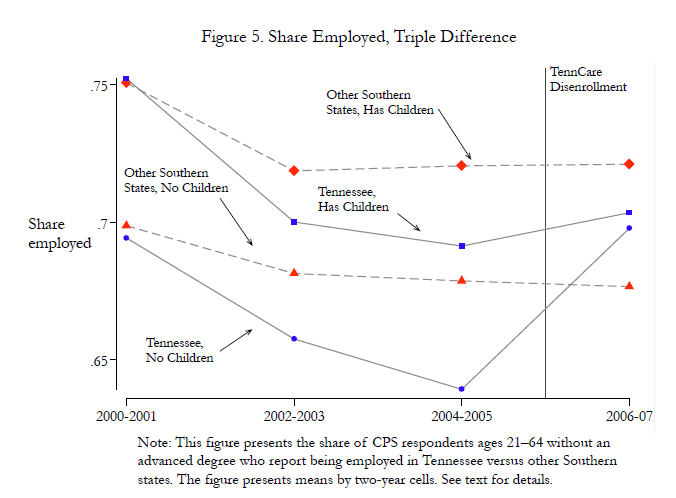 In Nevada, according to an Urban Institute analysis funded by the Robert Wood Johnson Foundation, 127,000 uninsured adults will be newly eligible for Medicaid under the Obamacare/Sandoval/Nevada Legislature rules. According to the same Urban Institute analysis, some 89.2 percent of them, or 113,000, are expected to be adults with no dependent children — individuals who could work, but under public health care subsidies, often do not.

“One must exercise considerable caution when directly applying our results to the ACA,” write Garthwaite, Gross and Notowidigdo, “but our results appear to indicate that the soon-to-be-enacted health care reform may cause substantial declines in aggregate employment.”

The authors conclude by emphasizing “that our predicted employment declines arise from changes in labor supply and not labor demand. Therefore, the effects do not necessarily imply a welfare loss for individuals choosing to leave the labor force after receiving access to non-employer provided health insurance.”