LAS VEGAS — The Tahoe Regional Planning Agency is winning national awards from government-planning professionals, but among homeowners in the five counties surrounding Lake Tahoe, it’s the least popular local government agency of all.

Seventy percent of homeowners in the Lake Tahoe Basin said TRPA would not take their concerns very seriously and 47 percent expressed much frustration with TRPA.

When poll respondents reporting minimal experience with the agency were excluded from the calculations, the negatives went up — to 72 percent and 55 percent, respectively.

In every case, TRPA’s negative numbers are significantly higher than those of other local government agencies in the Basin and higher still when compared to the attitudes of homeowners just outside the basin. (See table with details.)

Those are among many findings produced by two new surveys of attitudes toward local governments of homeowners living in the counties surrounding Lake Tahoe.

The two automated telephone surveys — one inside the Tahoe Basin and one in the same five counties but outside the Basin — were conducted September 17-19, contacting homeowners with land-line telephones.

The surveys, conducted for Nevada Journal by PMI International, have a margin of error, plus or minus, of 5 percent.

Homeowners were first asked to characterize the quantity of their experience with various governmental entities. Then they were asked to evaluate each entity in three different contexts.

While none of the governments scored especially well, the Tahoe Regional Planning Agency regularly scored lowest.

“Hypothetically,” respondents were asked, “let’s say that you and a neighbor are concerned, because you believe a local government is going down the wrong path on an important issue. If you and your neighbor attend a public meeting of that government to ask it to reconsider, how seriously do you believe each of the following government entities would take your concerns?”

Of 172 responses from homeowners inside the Basin, 70 percent said that TRPA would not take such citizens’ concerns very seriously. That was worse than county government, at 61 percent, and city government, at 57 percent. 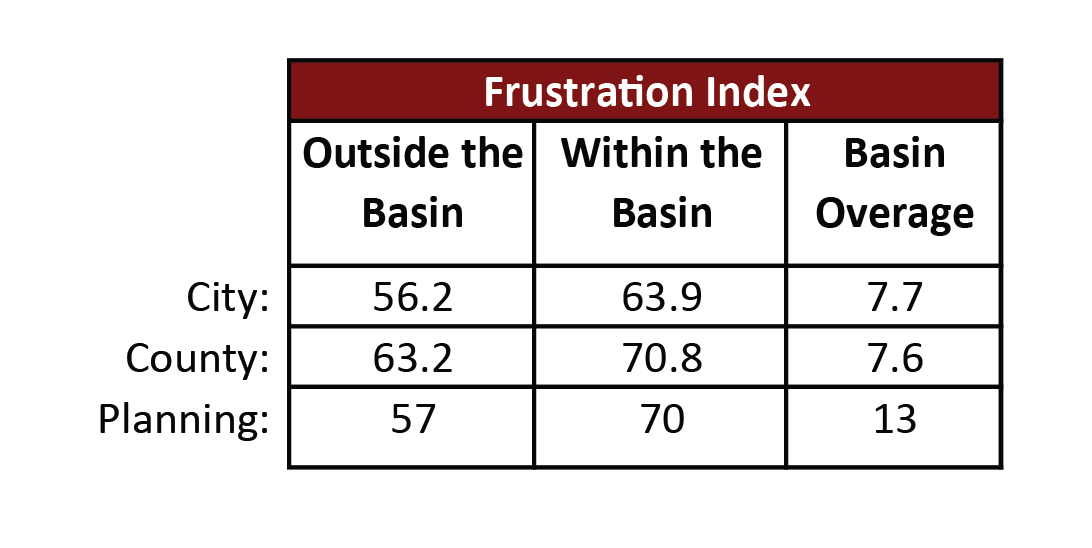 The second evaluative question probed homeowner frustration with government. It asked: “To what degree have you found your experience with your local governments frustrating?”

Of homeowners with experience of the government agencies responding from inside the Basin, 52 percent said that they experienced “much frustration” in dealing with TRPA. That was worse than their reported experience with county government, at 35 percent, and city government, at 46 percent. (Frustration details breakdown.)

Comparable outside-the-Basin homeowners regularly reported less frustration. Regarding their local planning agency, 33 percent reported “much frustration,” while 29 percent characterized their county government that way, as did 28 percent for their city government. 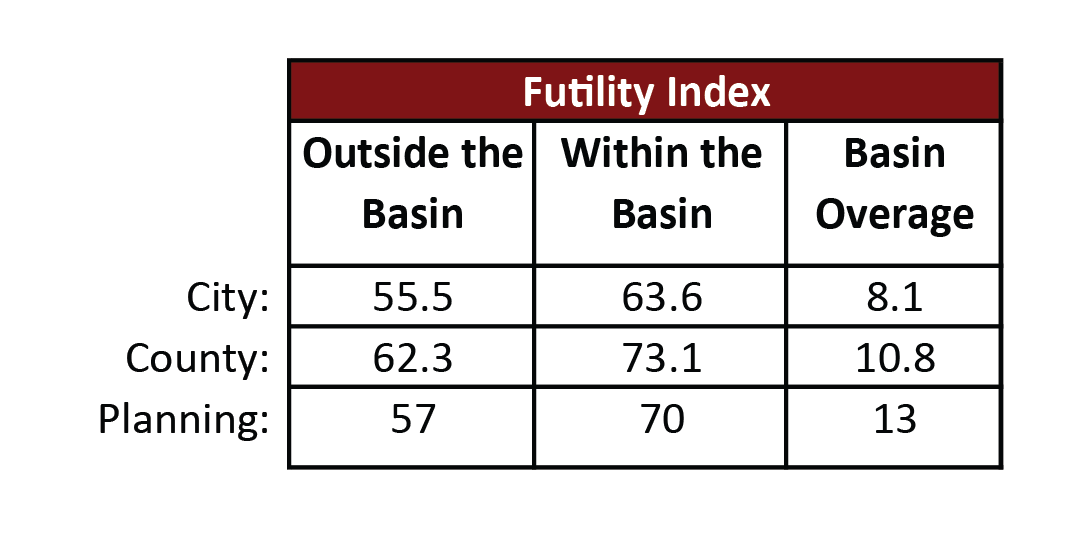 The survey’s third evaluative question sought to identify the extent to which homeowners find dealing with any of these government entities simply futile.

Respondents were asked to rate “the degree of futility you’ve felt in dealing with each” of the governments by selecting among “not futile,” “somewhat futile” and “very futile.”

Here again, TRPA’s ratings were the most frequently negative — given a “very futile” classification by 57 percent of Basin respondents with experience of the agency. In comparison, the percentage who saw county government in such terms was 32 percent, while city government came in at 37 percent.

Outside the basin — but within the same counties — only 37 percent of agency-experienced homeowners gave their local planning agencies the “very futile” ranking. County and city governments received that rating from 28 percent and 24 percent, respectively. (Futility details breakdown.)

Given the tenor of Basin homeowners’ answers to the survey, it may not be surprising that most of them perceive that they have less freedom than Americans who live elsewhere.

That question was introduced in each survey with the statement, “Many different government entities make and enforce rules in the Lake Tahoe Basin. It has been argued that a result of this is that homeowners within the Basin end up with less real liberty, practically speaking, than Americans who live outside the Basin.”

Basin homeowners, by a 59 to 41 percent majority, answered that “Basin residents end up with less liberty than Americans outside Tahoe Basin.”

However, homeowners living in the same counties, but outside the Basin, don’t see the problem. They see Basin homeowners as having just as much freedom as everyone else.

Within the Basin, the rate of participation by homeowners was significantly higher than the rate statistically normal for automated surveys. Of 2,745 individuals contacted live, 5.97 percent, or 164, completed all 16 questions.

Outside the Basin, the rate of participation by homeowners was statistically normal, according to experts consulted by Nevada Journal. Of 7,492 individuals contacted live, a total of 256, or 3.42 percent, completed all 16 questions.

Findings did not appear to vary significantly, depending upon the amount of time that respondents had lived in their homes.