It was legislation that would have lowered the major obstacle that Nevada citizens now regularly face whenever they seek to review state- and local-government records that, by law, are supposed to be public.

AB 159 — introduced by Assemblyman Richard “Tick” Segerblom — would have, among other things, limited and reduced the fees that agencies charge record seekers.

Not surprisingly, multiple government agencies hastened to oppose the bill — which quickly died right where it had been introduced: in the Assembly’s Committee on Government Affairs.

“The problem,” testified Joyce Haldeman, associate superintendent for the Clark County School District, “is that there are more of them who come in and ask for requests than there are of us.”

Often, she told lawmakers, people are looking for a needle in a haystack. While the needle itself is not expensive, the public, said Haldeman, wants the district to pay for the haystack while staff sorts through it.

“So, it becomes a real problem for us to do it,” she said.

James W. Pierce, assistant county clerk for Clark County, told lawmakers how easy the law makes it for someone to walk in and request “every record that [we] have.”

If that were to happen “day in and day out,” said Pierce, “it would not be long before we would be overwhelmed and no longer meeting any of our other duties.”

When requesters must pay for the cost of making copies, reasoned Pierce, it helps them narrow down their searches before they actually walk in and makes their requests.

The City of Henderson, which also opposed the bill, noted that while the vast majority of the city’s requests for minutes are typically completed via electronic file at no charge, the city does receive requests for minutes that are extensive and require research into multiple years. AB 159, said city records analyst Nathan Hill, would prohibit charging fees for extensive use of staff time.

Supporters of the bill, however, argued that public agencies are charging large fees to delay or discourage access to public records.

“We asked the [Clark County] school district for a year’s worth of records [billing and bank statements] related to their 1,600 or so purchasing cards,” said 8 News NOW reporter Colleen McCarty. She was explaining a public-records request that was part of an investigative report by the television station into public-official spending.

“I was told it was going to cost more than $34,000 to have that request fulfilled,” she said. “Half of that cost would have been for copies, and the other half was for access.”

The station had also requested expense records for nine or so top-level officers of six public agencies. Four of the agencies provided the records for free or for $50 or less. But the two remaining agencies each charged the station more than $400.

“Those costs,” McCarty told lawmakers, “were not only for actual paper; they were for access.

“We ended up paying staffers at various different levels — from the line staffer who pulled the records to the attorney who reviewed the records to see what, if anything, needed to be redacted.

“Then there was someone else to sort the records. So before we even got to the copy cost, which averaged about 10 cents or so for each page, we were paying several hundred dollars just for the cost of access.”

“More and more,” concluded McCarty, “this is the way public agencies work to delay us or to discourage us entirely from getting the records that we believe our open society demands the public has access to.”

Questions selected for special attention were: What are the constraints facing public entities? And what are the barriers or limitations on access facing the public at large?

Beginning last summer, multiple public agencies throughout the state were selected and contacted for the project. In Southern Nevada, Clark County, the City of Henderson and the Clark County School District were selected. Initially, each entity was invited to suggest what it believed might be the most efficient and amicable approach for the inquiry.

Henderson immediately responded with a meeting. Researchers were taken on a tour of the city’s records facilities and given an overview of the city’s records-request tracking software, which even crafted reports specific to the project’s inquiries. Henderson has continued to work in a collaborative effort on this project.

Likewise, Clark County met with TransparentNevada to discuss the best way to proceed in the information-gathering phase. County officials, both elected and salaried, continue to cooperate with the project, recently granting interviews with Clark County Clerk Diana Alba and County Recorder Debbie Conway.

“I don’t know if we can really help you on this one,” wrote David Roddy, whose title is public information officer, “as there is no central collection point for public records requests. Each department keeps their own records and in our office, we don’t compile the who, topic, etc., we only track the number of requests and each pio has the requests that they responded to. A more detailed system would be nice, but we just don’t have the staff to devote that much time to it.”

Clark County had had similar issues, but in one meeting, county officials and TransparentNevada’s representative developed a plan for how best to proceed.

In October, the project was formally introduced, with notices going out to various agencies, including CCSD. Again a meeting was sought with school district personnel to discuss the optimal way to proceed. Again, however, the district preferred to keep its distance from the project.

Two and a half months later, in January, TransparentNevada did receive the district’s policies, fee schedules and record retention schedule as requested — along with a written description of the district’s public-records process and a statement that CCSD does not have a tracking document.

Yet, that statement itself conflicted with a document the district had supplied in response to a September records request. Following the district’s hiring of a consulting firm to audit the district’s communications operation, TransparentNevada had asked to inspect “any documents, memoranda, reports or other information compiled regarding public records requests” that had been made available to the consultants.

Nine documents were provided in response to that request and one of them, a chart, showed that — contrary to the district’s statement — the district does track public-records requests.

Even more significantly, the public-records requests that came into the Communications Office during each of the years made up less than 1 percent of the total inquiries. 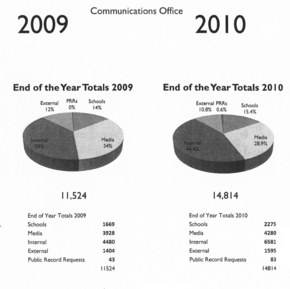 For 2009, according to the district’s chart, the total number of inquiries coming into the communications office was 11,524. For 2010, inquiries totaled 14,814. Most of the new requests came from within the district itself.

While several agencies — including the Office of the Nevada Attorney General, the state Department of Education and the Las Vegas Metropolitan Police Department — chose not to meet with TransparentNevada for discussions on the best way to proceed, every agency did respond with substantive information, even in some cases providing useful recommendations.

The Clark County School District, however, continues to distance itself from the project.

Most recently — and most bizarrely — the district chief of staff recently responded to a 15-question survey by indicating, in the answer-space for each question, that “This inquiry does not constitute a request for a document under the public records law.”

In the upcoming weeks, Nevada Journal will report further on the results of the Public Records Project.

Karen Gray is an education researcher with Nevada Journal. For more visit https://nevadajournal.com and http://npri.org.