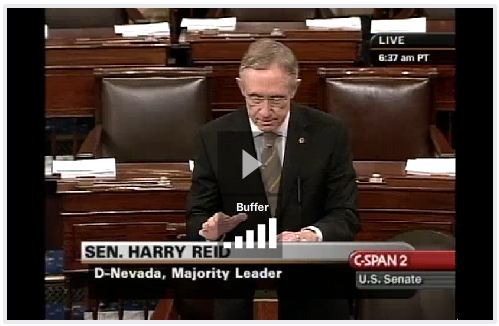 Barack Obama wasn’t the only high-profile public figure who repeatedly misled Americans about the “health reform” legislation that Democrats were trying to push through Congress in 2009.

Nevada’s Harry Reid, atop the U.S. Senate as majority leader, was also regularly telling the country, “If you like the health care you have, you can keep it.”

That’s what a survey of the Congressional Record — the official journal of the U.S. Congress — shows.

During the summer of 2009, Sen. Reid made that pledge from the Senate floor eight times. Usually he repeated it rote, word for word.

All of Reid’s lieutenants in the Senate leadership — Dick Durbin (Ill.), Chuck Schumer (NY) and Patty Murray (Wash.) — did the same, carefully enunciating that same assurance, exactly verbatim. A plurality of other Senate Democrats also made sure to inject the same promise, word for word, in their public remarks.

Why were Sen. Reid and Senate Democrats always so careful to recite the “you can keep it” phrase with virtually no changes, almost like a verbal tic? Because they had a big problem and Democratic Party “message-framing experts” were saying those specific words had been scientifically tested in polls and focus groups to solve their problem.

Simply stated, the Democrats’ problem was that big majorities of Americans, polls showed, didn’t want what the party was selling. People were fearful that what the GOP was characterizing as “a government takeover of health care” would, indeed, end up taking away the private insurance coverage they already had — and with which they were well satisfied.

Actually, what the Democrat messaging experts — longtime top party pollster and strategist Celinda Lake and the leftist Herndon Group — had found was unsurprising: When people were assured that their health plans, doctors and hospitals wouldn’t be taken away from them, their opposition to the legislation diminished.

Thus, making that simple, clear promise — even if not true — offered Senate Democrats a way to gain a short-term edge in the warfare over their legislation.

And they took it.

Today, four years later, the assurances that President Obama, Reid and Senate Democrats made to the American people have been designated by PolitiFact.com as the Lie of the Year, while the President, for his repeated misrepresentations, was given four Pinocchios by the Washington Post’s Fact Checker and included atop its “biggest Pinocchios of 2013” page.

Is it possible that Sen. Reid and his top Senate lieutenants never understood that the “Patient Protection and Affordable Care Act” they were designing would, if passed, kick most Americans out of their pre-Obama health-care plans?

It seems exceedingly unlikely. As Politico’s John Harris and David Nather wrote last November, the “larger longer-term threat” to Obamacare is that it is “working precisely the way it is supposed to work.”

The “stumbling start” of the HealthCare.gov website, they opine, “is that it shined a harsh light on intended consequences — more costs and more government regulation — that were always embedded in the ACA but were deliberately downplayed by Obama and Democrats.”

Now, they say, “some very clear tradeoffs that were always central to Obamacare have been put on sharp display:

It is, in many respects, a classic social welfare program. Like other social programs, it involves transferring from haves to have-nots. Healthy people are going to have to pay to help sick people get coverage. People who had skimpy coverage before — and in some cases, not-so-skimpy coverage — will have to upgrade to insurance that covers more things, but costs more. And young people will have to pay so older people don’t face sky-high premiums…

For some people, the policy changes were always going to be highly disruptive. … [T]he law eventually has to move people with individual coverage into new plans with stronger rules and benefits. Whether it happens now or later, it has to happen — otherwise the new market falls apart.

There is no subtle way to control costs. To keep the prices of the new plans from rising even higher, a lot of them have narrower networks of doctors and hospitals than the health plans most Americans are used to. And the cheapest Obamacare plans have high deductibles — so people who go for the lowest monthly premiums may find that they’re stuck with higher out-of-pocket expenses.

The changes will be felt by more than a sliver of the population. You may not be taxed directly to pay for the financing of Obamacare itself, which includes subsidies to help low and middle-income people buy coverage. But health insurers will be, and they’re going to pass their costs on to you. And there’s talk that employers could follow the lead of the Obamacare exchanges and shift to narrower doctor networks in a few years — because they’re running out of other ways to control their own costs.

It is not as if these trade-offs — the kind required by any big social program — were not understood by experts at the time Obamacare was being debated in 2009 and 2010. But they certainly weren’t part of the pitch Obama and the Democrats made to the rest of America — the people who shouldn’t have had to read between the lines to know what was going to happen.

The New York Times recently noted that the ACA legislation put together by Sen. Reid and his lieutenants — consulting closely with the Obama White House — was in essence a wealth-redistribution scheme.

It was designed to, by law, take resources away from the 80-plus percent of Americans who purchase health-care insurance they like and use those resources — in the words of the Times’ John Harwood —“to extend health coverage to those who had been either locked out or priced out of the market.”

Headlined, “Don’t Dare Call the Health Law ‘Redistribution’,” the October 11 Times article said the “R-word” is, “these days … particularly toxic at the White House, where it has been hidden away to make the Affordable Care Act more palatable to the public and less a target for Republicans, who have long accused Democrats of seeking ‘socialized medicine.’

“But the redistribution of wealth has always been a central feature of the law,” continued Harwood, “and lies at the heart of the insurance market disruptions driving political attacks this fall.”

While the Politico and New York Times articles are recent, as far back as November 2009 the Congressional Budget Office had notified Reid and other Democrats that the bill they were preparing to pass would raise premium costs for most insurance plans in the individual market.

In a letter to Indiana Senator Evan Bayh, copies of which went to Reid and Senate Minority Leader Mitch McConnell, the CBO reported that it and the staff of Joint Committee on Taxation “estimate that the average premium per person covered (including dependents) for new nongroup policies would be about 10 percent to 13 percent higher in 2016” than if the Affordable Care Act was not passed.

The higher-cost premiums, said the CBO, reflected the new “essential health benefits” that insurance companies must include in their policies, and thus individuals seeking health insurance must purchase — such as maternity care, whether or not the individual is male or a post-menopausal female, prescription drugs, mental health, substance abuse treatment and whatever other “benefits” that the federal Secretary of Health and Human Services may decide to require.

The CBO noted that initially some individual insurance policies could be “grandfathered in” at today’s prices, but that “because of relatively high turnover in that market (as well as the incentives for many enrollees to purchase a new policy in order to obtain subsidies), it expected that “relatively few nongroup policies” would remain at the lower prices by 2016.

More recently, the American Action Forum — run by Douglas Holtz-Eakin, a former director of the CBO — surveyed major insurers who represent “the vast majority of covered individuals in the U.S,” to learn how they saw the ACA impacting premiums in the individual and small group markets. 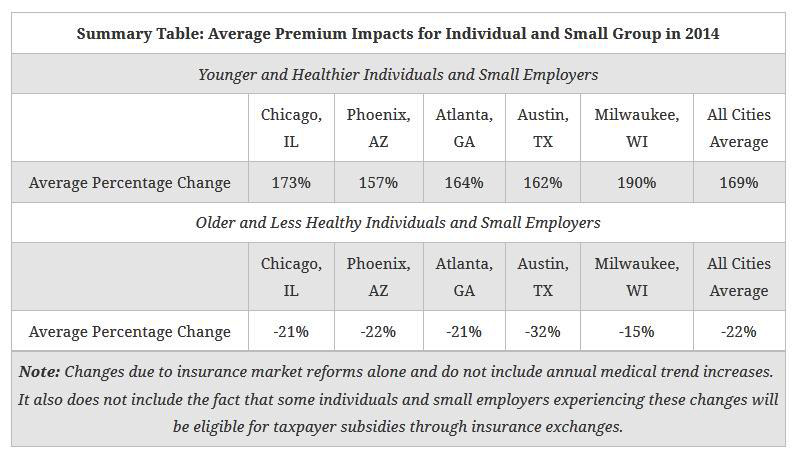 “In sum,” Holtz-Eakin reported, “the ACA promises massive sticker shock to the relatively young and healthy… Across all markets, the ACA will dramatically increase the cost of insurance for the young and healthy individuals and small employers…. In contrast, older and sicker individuals and small employers will be subsidized, leading to an average decline [in their health-insurance premiums] of just under 25 percent.”

In addition to the higher costs for premiums, deductibles and co-pays that Obamacare imposes on individuals, people increasingly are losing access to specialty care and their doctors — precisely the result that Sen. Reid and the Obama administration repeatedly promised would never happen. Because the ACA largely converts America’s health-insurance industry into a federally regulated public utility, insurers are extremely limited in ways they can, under the ACA, limit expenses.

One of the few paths available to them has been, notes the Washington Post, is to set up provider “networks that are far smaller than what most Americans are accustomed to.”

“A number of the nation’s top hospitals — including the Mayo Clinic in Minnesota, Cedars-Sinai in Los Angeles, and children’s hospitals in Seattle, Houston and St. Louis — are cut out of most plans sold on the exchange,” reports the Post.

Sen. Reid’s website today still boasts of his central role in the passage of Obamacare, listing it as one of his preeminent accomplishments.

“The Affordable Care Act,” it still says, “will ensure that all Nevadans and Americans have access to quality, affordable health coverage. This reform will not only lower costs, but improve choices, competition and offer more assistance to ensure that all Americans can afford health insurance.”