As Jones leaves CCSD, he leaves questions in his wake

LAS VEGAS — Dwight Jones came to Clark County assuring people of his “set of mid-western values.” They made him “always want to do the right thing — all the time — even if nobody’s listening,” he said.

But over the course of his two years in Las Vegas, did Jones himself see his own idealism eroding?

During his 2010 job interview with trustees, he told them that doing “business in a transparent way” and being upfront with the community was part of what made Colorado — where he was the state’s education commissioner at the time — one of the leading states in the country.

During that interview, Jones spoke candidly about allegations surrounding his personal use of a taxpayer-funded cell phone for which he failed to reimburse the state — $750 over three years. It was an oversight, he explained, a mistake.

The mistake was portrayed hard in the media, said Jones. And, yes, he didn’t think that was fair, “but, this is big-boy business,” he said, matter-of-factly. You don’t hide from it or cover it up. You correct it and are open with the public about it.

“Folks,” he summarized, “that’s my integrity that I bring with my mid-western values.”

In 2010, unable to justify a housing allowance for Jones, the Clark County School District board of trustees had put a special provision in his contract. It allowed Jones’ temporary housing or relocation costs to be reimbursed, up to $5,000 a month for from six to eight months, by way of the Clark County Public Education Foundation.

Under this “Superintendent’s Transitional Housing Fund,” members of the community could contribute money for Jones’ living expenses to the Foundation, which would then pass the money to CCSD for disbursement to Jones for housing reimbursement.

True to those mid-western values, Jones immediately upon arrival sought an opinion from Nevada’s Commission on Ethics, asking if he, as a public officer, could accept those private funds.

Another reason the issue went to the Ethics Commission is that Jones, as school-district superintendent, falls into Nevada’s ”billion-dollar blind spot” and is not defined by Nevada law as a public officer.

The Commission determined that accepting the funds did not create an ethical concern for the public employee who accepts them as part of this type of pass-through.

However, the Commission went on to conclude that, nonetheless, it believed the “artifice” of the Board in using “foundations or other similar organizations to engage public officers and employees in commitments for economic opportunities is poor policy and contrary to the intent of the Ethics Law to encourage public officers and employees to maintain the public trust.”

In light of this admonishment by the Commission, this reporter asked Jones if he was still going to accept the monies. “Who am I to question the Commission’s decision?” replied Jones. 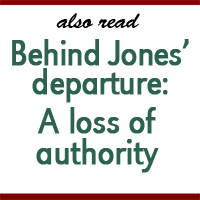 Then, two years later, in the mere weeks leading up to his resignation, Nevada Journal found Jones again in Nevada’s ethical gray area — the spirit of the law.

But first, there’s that other thing — the one Jones failed to mention in his 2010 job interview.

When asked by school board Trustee Linda Young if he had met with or spoken with anyone in CCSD or the community prior to coming to his interview, Jones said he had only reached out to Dr. Laverne White from Edison schools and then-state superintendent Keith Rheault.

However, as trustees soon learned, Jones had actually traveled to Nevada and met with other community members.

While most trustees were satisfied that Jones fessed-up after-the-fact, Young remained wary.

“I did try to vet all of those issues,” Young said to trustees as they deliberated Jones’ hire, “particularly the issues when I asked the question.” It “frankly” didn’t matter, said Young, whether Jones had been here or not. “The question was,” continued Young, “what did you do?”

“Just give me an honest answer,” was all Young wanted, she said. “And we didn’t get that. That bothers me,” she told trustees, “because I think the foremost, most important thing for a superintendent is to be direct, open and honest with the board.”

Jones was hired in a 6-1 vote, with Young casting the only “no” vote.

Recently, Nevada Journal asked school-district officials about the employment of Jones’ wife by the Public Education Foundation as a paid consultant, to the PEF, but who was to be “on loan” to the district.

“This looks like a skirting of the ethics and nepotism laws,” wrote Nevada Journal to school-district officials, seeking a district statement. “And, [it] brings into question [the superintendent’s] ethical standards and definition of transparency.”

Judi Steele, the Clark County Public Education Foundation’s president, had confirmed to Nevada Journal that Jenifer Jones, the wife of Superintendent Dwight Jones, had been hired last October by the PEF as an independent consultant and then “loaned” to CCSD.

“The Public Education Foundation will hire Jenifer Jones as a consultant,” opens an Oct. 3, 2012 email between Foundation and school-district officials, “and will then loan her to you as a Turnaround Zone Consultant.”

Mrs. Jones, according to the email, will be paid $3,125 monthly for eight months, October 2012 through May 2013, for a total compensation of $25,000. Additionally, Mrs. Jones will report directly to the district and be housed by the school district.

Dean Dupalo, director of the Nevada Center for Public Ethics and peer reviewer for the Center for Public Integrity’s 2012 State Integrity Investigation study, which scored Nevada at a D-, says this demonstrates the weakness in the State of Nevada’s ethics laws.

“Unfortunately,” says Dupalo, it’s a common tactic “where you have powerful individuals or their spouses, [that] because of their relationships, [they] are offered positions.”

For somebody in such a powerful position as Jones, to have his spouse also in a position that works with that same institution, according to Dupalo, is clearly a conflict of interest. “I don’t see how it gets any closer than that,” he says.

Rules in Nevada’s nepotism laws and Ethics in Government laws prohibit Jones from employing his wife — whether as an employee or independent contractor — with the district.

However, school-district and Foundation officials contend no ethical conflict existed here because Jenifer Jones was hired by the Public Education Foundation and not by CCSD.

Superintendent Jones, said Fulkerson, was unable to respond to Nevada Journal’s inquiries because he was in Texas tending to his ailing mother.

Steele had responded similarly. “This is a Public Education Foundation contract,” Steele emphatically stated during a January discussion. “Not a CCSD contract.”

“There’s an ethical code,” says Dupalo, whether it comes from the letter or the spirit of the law, that you don’t hire when “two individuals have that direct of a relationship.”

“Certainly,” says Dupalo, “this is violative of the spirit of the ethics laws in the State of Nevada — and basically, everywhere.”

Caren Cafferata-Jenkins, Esq., executive director of the Nevada Commission on Ethics, when interviewed about this, noted, first, that the Commission no longer has jurisdiction to enforce the anti-nepotism statute. However, she did say she “could see how this might cause the public to raise an eyebrow,” and that the scenario may create an appearance of impropriety.

On Jones’ first arrival in town, the new superintendent said his wife would not work for the school district. In fact, a recent Las Vegas Sun article announcing Jones’ resignation still portrayed the superintendent’s wife as a “public school volunteer” who also “helped with local foundations in Clark County.” In reality, Jones’ wife was a paid consultant.

So, why didn’t Superintendent Jones just come out from the beginning — in the spirit of transparency and openness — and inform the public of his wife’s application and subsequent hire for this position? Nevada Journal asked.

Instead she said Jones had “proven time and time again” his commitment to transparency and should be commended for “creating a transparent school ranking system, putting the budget online, inviting the community to be on the panels shaping new systems and appointing an officer to respond to public info requests.”

So, then, what was so special about Mrs. Jones’ position that the Foundation didn’t just give the money directly to the district to hire its own consultant — as was so typical? Nevada Journal asked.

“We believe The Public Education Foundation’s hiring of an independent contractor, to serve as Turnaround Zone consultant, is consistent with best business practice,” wrote Steele in an email statement.

Dupalo, on the other hand, says that officials involved are “actively and creatively circumventing the ethics laws of the State of Nevada.” And that this is not dissimilar to what the trustees did when reimbursing Jones’ housing costs.

“It’s a terrible thing to do as an individual or public official,” opines Dupalo. “It’s certainly unacceptable for the Clark County School District superintendent to engage in that sort of option.”

Another best business practice used by the Foundation when hiring Mrs. Jones: no written contract.

According to Foundation officials, the only written documentation memorializing the employment of Mrs. Jones was the Oct. 3 email to school-district officials.

“[The Foundation] is a private entity,” said Steel in a phone conversation last month. “And just like any other private business, many contracts are not in writing.” This practice of no written agreement, according to Steele, provides “flexibility” to make changes and adjustments as circumstances dictate.

As the wife of one of the state’s most prominent public officials, Mrs. Jones, it would seem, would recognize that her hire as a consultant to the very school district her husband headed would bring public scrutiny — and criticism.

So Nevada Journal asked Jenifer Jones why she did not insist upon a written contract laying out the terms of her agreement in clear, concise language.

Mrs. Jones did not respond to the inquiry. However, she previously offered, through email, that the work with “the turnaround team in CCSD has been very exciting and professionally rewarding.”

Nevada Journal was unable to locate a business license, in either Nevada or Colorado, for Mrs. Jones’ consulting business.

Steele, however, said a license is not her concern.

Mrs. Jones did not respond to an inquiry about licensing, either.

It is certainly true that it does take a highly ethical public official to always do the right thing — especially when no one is listening.

In the case of the now-former superintendent Dwight Jones, however, the question remains: Even if his self-proclaimed mid-western values made him always want to do the right thing — how frequently did he do it?

And while Jones is on his way out the door, the Nevada problems his tenure highlighted — in state ethics and nepotism law, the “billion-dollar blind spot” and a private foundation acting as an end-around “cutout” for CCSD — those problems remain.

And they beg to be adequately addressed.

Karen Gray is a reporter/researcher with Nevada Journal. For more in-depth reporting visit https://nevadajournal.com and http://npri.org.