With the hearing room’s approximately 200-plus chairs soon full and people standing two-deep along one side and across the back of the room, Treasurer staff opened a smaller, overflow room in the back.

It, too, was soon overflowing.

What were the major questions on most attendees’ minds?

Clearly — given the repeated queries, pleas and statements of parents, school officials and others — those questions concerned a requirement in SB302, the enabling legislation introduced and sponsored by State senator Scott Hammond.

That bill requires that children, to qualify, must have “been enrolled in a public school in this State during the period immediately preceding the establishment of [their] education savings account[s] … for not less than 100 school days without interruption…”

What exactly that provision will be held to mean, legally, will first depend upon the regulatory implementation that the Treasurer’s office proposes. Later, after opponents of parental choice launch their expected legal challenges to the regulations and to the law itself, it will most likely depend upon the decisions of the Nevada Supreme Court. 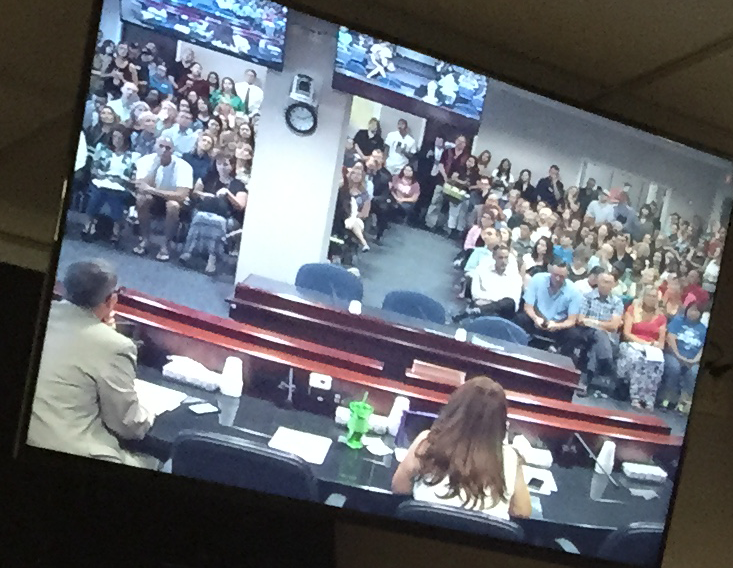 Still, possible exceptions to the 100-day restriction — for hardship, emergency and other cases — have been a subject of discussion within the treasurer’s office. And at Friday’s workshop, such exceptions were clearly on the minds of the parents in the room.

Nevertheless, an employee of the Nevada State Education Association teacher union, Mike McLamore, argued at length against any such exceptions.

Making the point several times that the NSEA is “generically” opposed to parental-choice programs, McLamore argued that the regulation drafting process should run out the clock to the statutory deadline for issuance of December 31.

“And so we are just here to say we ought to move slowly and judiciously on these regulations,” he said.

“We ought to give the full amount of time that the bill specifies for these regulations to be developed. And that is from July through December 31st of this year.”

State Treasurer Dan Schwartz responded that, “On the other side, there are a lot of parents in Nevada who are very interested in this legislation, and ultimately, we’re responsible to them.”

Those parents, he said, “need to make decisions on how their kids are going to be educated.”

In other words, were the NSEA’s “slowly and judiciously” advice taken, Nevada parents would not be able to make any plans about 2016 schooling until it was already 2016.

As McLamore repeatedly reminded everyone that the NSEA did not and does not support the ESA program, he went into what is now recognizable as a standard teacher-union litany.

“There still is a great deal of unfunded requirements in our public schools,” he said, along with “a lot of over-crowding, and some quality issues that still exist, even though we’ve gotten some new funds, during the session.”

As huge laughter and prolonged applause erupted from the Las Vegas audience, he added, “You don’t have to answer that.”

That led the Grant Hewitt, the treasurer’s chief of staff, to ask McLamore to elaborate.

“I’m curious what you believe that should be,” asked Hewitt. “Should that be how we judge teachers today in the public schools?”

At that, the Las Vegas audience erupted with much new laughter and applause.

“How do you believe we should be judging?” continued Hewitt. “I mean, your organization isn’t really big on accountability.”

The rest of Hewitt’s query was drowned out by another wave of laughter, and McLamore was left protesting that the NSEA is “very concerned” about accountability.

Audience reactions in this first regulatory workshop on ESAs suggest at least two important realities that Nevada’s education establishment has, until now, been able to successfully evade.

First is that, among knowledgeable parents, Nevada’s public education establishment has much less credibility, in actuality, than has long been conventionally assumed.

Second is that, already, the Nevada ESA program appears overwhelmingly popular and already is carrying the hopes and dreams of many Silver State parents for their children’s futures.