Meeting in a downtown Henderson Convention Center ballroom recently, parents began getting acquainted with the people and the unique plans of Pinecrest Academy of Nevada — the first-ever charter school approved by the state’s new Public Charter School Authority.

Classes for grades K-7 will open this fall at the school’s campus, 1360 S. Boulder Highway.

Although it’s in an older area of Henderson, parents came from across the valley to learn more about Clark County’s newest “School of Choice.”

“Choice,” Dr. Reggie Revis, Pinecrest’s principal, told the group, “means that you don’t have to be here.

“It’s not just because you live down the road that you have to come here.

“You have decided to be here.” 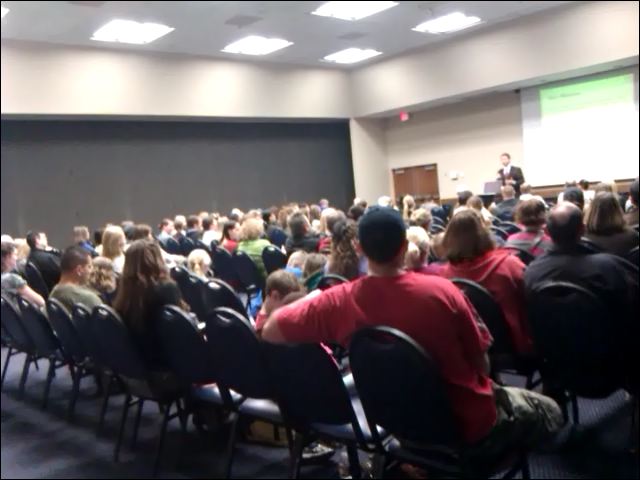 Dr. Reggie Revis, principal of Pinecrest Academy, talks about the new charter school before a full room of parents and potential students.

Unlike students attending regular public schools in the Clark County School District, children of parents who choose a public charter school can attend any charter school that has seats available. They don’t have to attend a particular school just because it’s geographically down the street.

“We live near [Nellis Air Force] Base,” one parent told Nevada Journal. “We’re driving 15 minutes every morning to take our kids to school.”

Driving to Henderson is just 15 minutes in a different direction, she said.

Charter schools are tuition-free public schools that operate independently of the local school board of trustees. Teachers continue to be licensed by the state and the schools comply with federal No Child Left Behind mandates.

But individual charter schools can differ substantially in their philosophies, guiding principles and governance structures. It largely depends on exactly what mission the school has undertaken.

For the parent who lives near the base, it’s about school performance.

Her children are zoned for a CCSD school that has not made adequate yearly progress for seven years, according to the No Child Left Behind rankings.

She spoke to Nevada Journal on the ground rule of anonymity because, she explained, she’s currently “fudging it” — driving her children across town to attend a school outside their zone and outside CCSD’s approved optional school-choice list.

She won’t put them in the school down the street because of its poor quality, she says. And she won’t send them to either of the schools on the CCSD school-choice list because they aren’t quality schools, either.

Under No Child Left Behind, parents of students in Title I schools that fail to make AYP two years in a row can opt for enrollment in another school which did make AYP. CCSD provides a list, typically containing two option schools, for parents to choose from.  Transportation to option schools is provided by CCSD.

With Pinecrest, the mother says, she won’t have to worry about “fudging” any more to get her children into an achieving school.

Parents can also expect elementary classes to visit the Science Inquiry room for about an hour a week to participate in active, hands-on science lessons. In addition, Spanish, Visual Arts, Physical Education and Music will be offered to all classes.

Currently, the school is speaking to sponsors about after-school soccer and possibly lacrosse. Karate is also planned for after school, and martial arts is planned to be incorporated into the PE program, Revis told Nevada Journal.

For a group of local private-school parents, it was these and other activities which caught their interest.

“We’re looking to a more well-rounded school,” one private-school mom told Nevada Journal. “It’s not just academics, but everything outside that as well.

“Some of the private schools are not offering sports or some of the other things —like music,” she said.

“We don’t want the status quo,” her husband added. “We want someone who is going to push our kids, keep them intrigued, engaged and keep them pushing.”

These parents, like the others in attendance, are looking for the best educational fit for their children.

“If it’s not here,” said the father, “it will be somewhere else. We’re looking for something more than public school.”

One mom from CT Sewell, an older Henderson elementary school, told Nevada Journal she liked the fact that teacher contracts were renewed on an annual basis.

“One of the things that I liked,” she said, “was that they can take [the job] away — [from] teachers that are not good.”

Her friend, Dawn Davis, chimed in, saying that to get the school or the district to do anything when there’s a problem with a teacher is “like an act of Congress.”

At Pinecrest, however, teachers who do not perform to standard will simply not have their contracts renewed, explained Bob Howell, a representative of the school’s management company.

Parents can learn more about the school and its ongoing parent information meetings or apply to Pinecrest Academy through the school’s website.

Currently, applications are being accepted for the next enrollment lottery selection, to be held on April 12, 2012.

“Enrollment,” wrote Revis in an e-mail earlier this week, “[has been] moving along swimmingly.”

Because Pinecrest is enrolling students daily, he could not provide an estimate for the number of slots open in each grade level.

However, Revis did say, “Our board can determine at any time to expand or add a grade level because of community demand.

“After all, charter schools exist to reflect and respond to the local desires of our good families.”

Karen Gray is an education researcher with Nevada Journal. For more visit https://nevadajournal.com and http://npri.org.