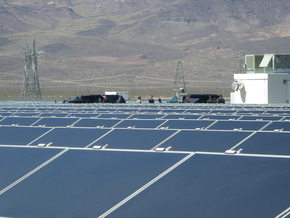 “I’d like those [critics] to visit this plant, and talk to the people who benefited from the [renewable energy] jobs,” said Obama.

Speaking before a few dozen people at the Copper Mountain Solar 1 power plant, the president cited the “hundreds of local workers” employed by the plant.

While over 300 part-time workers were employed during the plant’s construction, only five full-time employees currently work at the plant.

The 17,000 homes receiving Solar 1’s power, however, are in California. Local residents receive no power from the plant.

Stressing his administration’s goal of powering “over two million homes” with renewable energy, the president also suggested he’d like to see a national clean-energy standard imposed on Americans.

Nevada is one of those states with a so-called “clean energy” standard, in the form of a Renewable Portfolio Standard written into law. Currently, the state requires utility companies to produce 15 percent of their energy from green-energy sources, with the mandate increasing to 25 percent by 2025.

President Barack Obama arrives at the Solar 1 power plant in Boulder City Nevada to promote “green energy” in a fleet of SUVs.

“Sometimes you need a jumpstart to make it happen,” he said. “Some discoveries won’t pan out … Some automobiles failed, some airlines failed.

“But as long as I’m president, I will not walk away from the promise of clean energy.”

Andy Matthews, president of the Nevada Policy Research Institute, said President Obama’s call for an end to oil subsidies was encouraging. But he questioned the continuing government subsidies for renewables that the market finds wasteful.

“It’s disappointing, but not surprising to hear President Obama name-call those who disagree with his failed economic and energy policies,” said Matthews.

“After three years of failed federal-government efforts to jump-start the economy — including the president’s almost-$800 billion so-called stimulus plan — and the repeated failures of government-subsidized green-energy companies, it’s clear why the president doesn’t want to debate policies on their merits.”

The presidential speech followed a tour of the Solar 1 plant, the first stop on a four-state tour promoting his administration’s energy goals.

Local officials in the audience included Clark County Commissioner Tom Collins and former Nevada Senate Majority Leader Steven Horsford, who is currently running for Congress in the newly created CD-4. Secretary of the Interior Ken Salazar was also in attendance.

Kyle Gillis is an investigative reporter for Nevada Journal, a publication of the Nevada Policy Research Institute. For more in-depth reporting, visit https://nevadajournal.com/ and http://npri.org/.