Gov. Brian Sandoval has repeatedly explained his aggressive drive to implement Obamacare’s prescribed health-exchange system in Nevada by saying he wants the Silver State, not the federal government, to control the exchanges.

However the state legislation that Sandoval’s administration introduced and that he then signed in 2011 — Senate Bill 440 — gives the state of Nevada no control over the “Silver State Health Insurance Exchange” it established.

Instead, it — like the subsequent law, Chapter 695I of the Nevada Revised Statutes — simply promised to submissively do whatever the federal government directs.

That’s one implication of a gaping loophole in the federal Patient Protection and Affordable Care Act (PPACA) — popularly called “Obamacare” — now getting increasing attention in Congress and the U.S. business community.

It is also the subject of a Case Western Reserve University School of Law article released to the public Monday.

Obamacare sought to set up a nationwide network of government-created and government-run health insurance exchanges.

There, supposedly, individuals would shop for and purchase health insurance that was federally approved and controlled — and subsidized with federal tax credits.

So what is the large hole in the legislation?  It results from the decision by the drafters — embodied in multiple provisions throughout the text of the law — to make individuals eligible for a tax credit only if they buy their insurance through a state exchange, not a federal one. 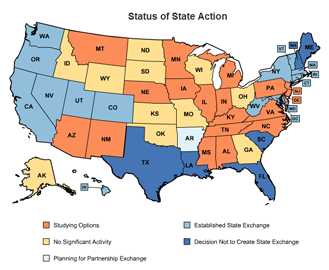 Thus, should multiple states decline to set up their own exchanges, the essential linchpin of Obamacare collapses. And as of June, only 14 states — one of which is Nevada — had passed legislation to implement the state-based exchanges.

This was not at all the result that congressional Democrats expected in 2010 when they were crafting PPACA. At the time, they’d convinced themselves that the public would strongly support Obamacare, once it was better known.

Senate Majority Leader Harry Reid, for example, told The Wall Street Journal that the only reason Missouri voters passed an anti-Obamacare ballot measure by a huge margin was because “people have a lack of understanding of our health care reform bill.”

But, he insisted, “The more people learn about this bill, the more they like it.”

“The trend is turning all over America today,” Reid asserted. “Once you explain what’s in the bill, the American people of course like it.”

Relying on those assumptions, Congress used one of its customary approaches to implementing new programs nationwide, explain the authors of the Case Western Law working paper, Jonathan H. Adler and Michael F. Cannon.

Thus PPACA — following the model used for Medicaid and the Clean Air Act, among other laws — was written to promise financial incentives to states that chose to comply, and to prescribe federal “fall-back” exchanges to operate in states that did not.

So confident was Congress that virtually all states would hasten to comply that it didn’t even allocate any funds to set up the federal exchanges.

But over-optimism about the law’s eventual popularity was not the only reason Congress denied federal exchanges the subsidies and tax credits. As Adler and Cannon point out, congressional leaders also had strong political reasons for preferring the state-based approach.

Exchanges based in the states keep the full cost of Obamacare’s takeover of one-sixth of the American economy from appearing in the federal budget. Because households would give money directly to insurance companies through the state exchanges, those transactions also would not appear on the federal books. Likewise, the employer mandate — which requires employers to purchase coverage for their workers through the state exchanges — removes those transactions from the federal budget.

The state exchanges also reduce PPACA’s impact on the federal budget by making eligibility for tax credits and subsidies something that functions through the states. Households claiming the huge PPACA entitlements through federal exchanges would dramatically increase the federal deficit.

So, repeatedly in the law’s text, Congress made the state-created exchanges — and not the federal exchanges — the only exchanges where individuals and businesses could get Obamacare’s federal insurance subsidies and tax credits.

It is section 1401 of the act, for example, that creates a new section in the Internal Revenue Code — section 36B — that authorizes refundable “premium assistance tax credits” for individuals who purchase “qualifying” health insurance plans. Section 1401 also, explicitly, limits those tax credits to purchases made in exchanges established under the act’s section 1311 — which requires that exchanges must be “a governmental agency or nonprofit entity that is established by a State.” (Emphasis added.)

Section 1402 of the act similarly authorizes subsidies for the purchase of health insurance plans in the form of direct federal payouts to private health insurance companies. The section, however, makes those subsidies available only where the section 1401 tax credits are available — namely, through the state-run exchanges described in section 1311.

Neither section 1401 nor 1402 allows the subsidies to be channeled through exchanges set up under section 1321, which authorizes the secretary of the federal Department of  Health and Human Services, when the state does not comply, to “establish and operate” a federal exchange within the state.

For businesses that see the provisions of Obamacare as heavy-handed threats to their economic viability, the restriction of the entitlements to state-based exchanges offers a critical escape hatch — if, that is, their firm is located in one of the majority of states that have declined to initiate state-based exchanges.

The reason is that it’s those entitlements that trigger the hammer Obamacare holds over the heads of businesses — the financial penalties for any firm that declines to comply with the federal government’s health-benefits scheme.

Since those entitlements only apply in states with state-run exchanges, the accompanying Obamacare penalties are also only operative in those states.

For states like Nevada that have collaborated with the Obama administration, this could pose a significant competitive problem, argues Cannon.

Because “the law is very clear,” and “laboriously and explicitly restricts those tax credits and subsidies to exchanges created by states,” he told a Washington, D.C., audience July 2, “states that refuse to create an exchange can therefore block those subsidies, they can exempt their employers from that tax, and they can even lure jobs away from other states where those states do impose that tax on their employers unnecessarily.”

A letter from 73 members of the U.S. Congress, writing to the nation’s governors in late June, made a similar point, while asking governors “to oppose any creation of a state health care exchange mandated under the President’s discredited health care law.

“These expensive, complex, and intrusive exchanges impose a threat to the financial stability of our already fragile state economies, with no certainty of a limit to total enrollment numbers,” wrote the 12 senators and 61 representatives.

“Resisting the implementation of exchanges is good for hiring and investment. The law’s employer mandate assesses penalties — up to $3,000 per employee — only to businesses who don’t satisfy federally-approved health insurance standards and whose employees receive ‘premium assistance’ through the exchanges.

“The clear language of the statute only permits federal premium assistance to citizens of states who create a state-based exchange.”

“The problem,” write Adler and Cannon, “is that the PPACA precludes the IRS from issuing tax credits in federal Exchanges.

“The plain text of the Act only authorizes premium-assistance tax credits and cost-sharing subsidies for those who purchase plans on state-run Exchanges, and the IRS rule’s attempt to offer them to other individuals cannot be legally justified on other grounds. In other words, the IRS is attempting to create two entitlements not authorized by Congress, and in the process, to tax employers whom Congress did not authorize the agency to tax.”

Normally, the authors acknowledge, an IRS rulemaking expanding eligibility for tax credits or subsidies beyond what Congress had authorized would escape judicial review.

However, they say, “the interaction of the tax credit provisions with the law’s employer mandate provides a basis for Article III standing to challenge the IRS rule.”

In short, say Adler and Cannon, this question, like many others, will be dragging Obamacare through the courts for years to come.

A Monday article in Politico Pro raised the question of when businesses could actually legally challenge the IRS rule, and said, “If they have to wait until the penalty goes into effect, that means it would take years.”

But Adler told the publication that the Supreme Court’s recent finding in the health-law case — that the Anti-Injunction Act didn’t prevent it from deciding on the validity of the individual mandate before it took effect — strongly suggests that no delay is necessary.

He conceded, however, that the timing issue could be significant.

Nevada Journal solicited comments on this story from the Sandoval administration. No response was received by press time, however.