Remarkably, LAUSD’s current Independent Monitor, Dr. David Rostetter, who figured prominently in Part Three of this series, also has had a significant history with Nevada — specifically, with the Clark County School District.

The background of that hire, according to the Las Vegas Sun’s then-assistant managing editor, Ken Ward, was that since at least 1991 the district had been receiving complaints from the U.S. Office for Civil Rights (OCR) over CCSD’s instruction and transportation services for special-needs students.

Then, in October 1995, the OCR filed yet another complaint against the district, asserting five other serious issues, specifically:

Both Sontag and Rostetter had been with the U.S. Department of Education for years, with important national responsibilities administering IDEA. Sontag had been the DOE’s national director for special education, and Rostetter had directed the DOE division that reviews state special-education plans.

Both had also been previously under contract to CCSD for consulting services — Rostetter, in particular, having had a 4-year relationship with the district, producing numerous reports.

However, soon after they’d turned in their audit report to CCSD in early 1996, it became apparent the district did not like the findings, which Nevada news media were pressing to see.

First, release of the 140-page document to the media and public was held up for over a week, while lawyers for the district redacted 15 allegedly sensitive paragraphs.

Those paragraphs, said the district, touched on “some very crucial legal concerns … regarding …ongoing legal suits.” Later it became clear that the sensitive paragraphs reported transgressions of state and federal law by the special-education division.

Next, the district launched a campaign to discredit the work of the high-profile consultants it had selected and hired.

A parent who’d read the entire document, however, said that Cram’s remarks confused her. “The audit doesn’t even talk about special education schools being closed,” she observed. 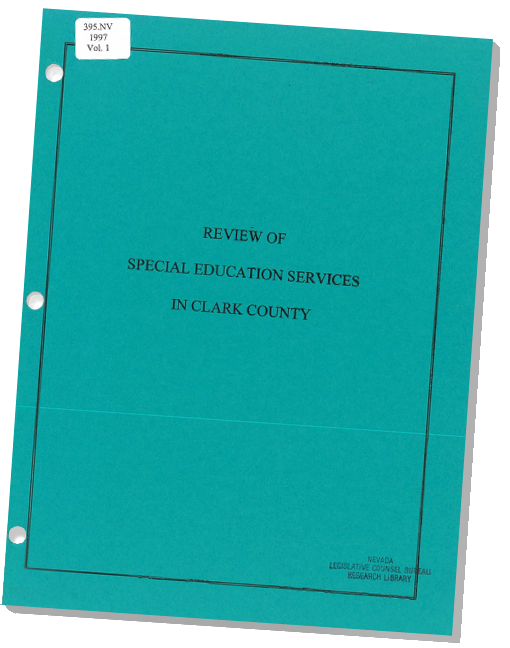 Nevada Journal found in state archives copies of the documents the consultants had submitted to the district, and confirmed no mention in the documents of such closures.

It actually was across the state line in California, however, where such potential closures were a hot issue in the news. There, consultants to the Los Angeles Unified School District had made the recommendation.

Rostetter and Sontag characterized the CCSD superintendent’s remarks as an intentionally inflammatory red herring — an attempt to exploit the intensely protective feelings of special-needs parents.

“Inclusion is not relevant to this audit,” said Sontag. “It’s outrageous to link this report with that.”

Said Rostetter: “Cram is scaring parents and inflaming the situation, trying to divert attention from the real problems.”

Wrote the Sun: “Although Rostetter and Sontag lean toward the ‘inclusion’ philosophy of putting special-ed students into regular classrooms, they stopped short of recommending it in their report.”

When the district finally allowed its lawyer to discuss “in general terms” redacted passages of the report, it became evident, said the Sun, that the excised passages held reports of district wrong-doing.

“Records tampering, violations of state and federal laws and management overriding staff decisions are among the allegations in 15 paragraphs deleted from the Clark County School District’s special education audit,” reported the newspaper.

Over the two previous years, said the newspaper, “80 requests for due-process hearings have been filed by CCSD parents over evaluation, eligibility, therapy and failure to carry out individual educational plans.”

Stung by the CCSD administration’s attack on the credibility of their work, Rostetter and Sontag retained a local attorney and announced they were compiling detailed documentation of alleged violations of law by the district’s special-ed division.

The response of school-district trustees was, on the day before a scheduled June 26, 1996 public board meeting, to stop payment on the consultants’ current bill and fees.

“After being informed that the audit has gone over budget,” reported the Sun, “trustees voted to only pay travel, housing and food expenses for the consultants.

“Sontag and Rostetter said they are prepared to defend their work at tonight’s board meeting, but that they may not attend tonight’s meeting in protest of the payment delay.”

Announcing that they considered CCSD’s failure to pay as a termination of the consultants’ relationship with the district, Rostetter said they were weighing taking the full report to federal and state authorities, “including the U.S. Department of Justice, the Department of Education, the attorney general and the Nevada Bar.”

We’re telling the truth. We lay out data that directly confronts the competency and ethics of management that are running the district, and [their] response has been to circle the wagons, call in the chips, and assign staff for hours and hours to call all over the country and ask questions about us, because people’s jobs are on the line here.

The June 26 board meeting turned out to be over six hours long, two-and-a-half hours of which were devoted to emotionally charged testimony from some 50 members of a standing-room-only crowd. CCSD trustees then instructed Superintendent Brian Cram to provide them with a time-and-cost analysis of changes the district should implement in its special-ed division.

It was not, however, an entirely confidence-building decision, since Cram was told, according to the Sun, “to look at the consultants’ recommendations and those provided by staff.”

Rostetter and Sontag had earlier reported in the audit that special-ed division administrators had been noticeably resistant to the audit from the very start, leading staff to at times be “fearful of sharing information.”

“Even in the midst of indications that serious issues were being addressed and brought to light,” wrote the consultants, “the Division leadership resisted many recommendations and concerns expressed by the reviewers.”

At the board meeting, too, while some employees of the district praised the special-ed division and objected to the audit’s critique, parents and other teachers complained of intimidation and retaliation from a system that regularly failed children.

“Because of the abortion you call the special education system, I’m being forced to leave the state to provide a safe and productive education for my son,” said Roseann Maxant.

Parent Randi McKim used movie titles such as “True Lies,” “Malice” and “Clueless” to describe what she feels is the district’s position on special education.

She complained of “inhumane treatment, intimidation, gag orders and now, scandal” within the special-ed division, and said, “I’m mad as hell and I’m not going to take it anymore.”

Consultants Sontag and Rostetter had confirmed during the marathon meeting that they had documented 13 cases of what they term “severe” violations of state and federal laws.

Most of those violations, reported the Sun later, involved “the destruction or alteration of student records.”

Noted Ward: “These are civil rights and parental notification issues that federal authorities tend to take seriously, and that school districts obstruct at their peril.”

In his personal news column, the assistant managing editor observed that Sontag and Rostetter, for daring to candidly point out CCSD’s special-ed flaws, as they had been hired to do, had been subjected to fierce personal attack in the form of misleading stories planted in the media:

Substantive issues? Coincidental timing? Hardly. These stories — specious to the core — were planted in the media and were designed to distract attention from the real business at hand. They demonstrated that Hell hath no fury like a bureaucracy threatened.

Ward also noted that — significantly — the defamation campaign had been the bureaucracy’s immediate response to the physical appearance of the reviewers in the district, even before the report was drafted, stating:

In their introductory passage, Sontag and Rostetter wrote presciently:

The reviewers have come to the conclusion that the division chose to aid and facilitate a negative response before the report is even received by the School Board. In the first days of the review, reports came back that managers were telling staff they would fight this review. (Emphasis added.)

For a special-ed division to so immediately declare war against highly qualified reviewers appeared extremely telling — a de facto admission that many of the most appalling allegations made by parents of special-needs children were known inside CCSD to be true.

Hard evidence for this began arriving in Southern Nevada shortly after Sontag and Rostetter returned home.

They shipped to Las Vegas three crates of documentation itemizing the 13 areas of law-breaking in CCSD’s special-ed department of which they’d informed trustees earlier.

“The original 15 deleted paragraphs are tame compared to this stuff,” Sontag told Ward. “There’s no amount of white-out that can be used this time.”

Document destruction by top-level administrators, illegally drafted individual education plans, violations of placement policies, improper counseling programs and a boondoggle in adaptive physical education were all substantiated in the shipment, according to the paper.

“Also under fire,” reported the Sun, was “CCSD’s ‘aversive behavior management,’ which authorizes personnel to force restless pupils onto treadmills and strap weights to their ankles to limit their motion.”

At the state legislature’s next session, CCSD’s aversive practices would be made illegal.

At the end of January 1997, CCSD finally released a three-inch-thick bundle of the documentation that backed up Sontag and Rostetter’s allegations of the district’s violation of multiple state and federal laws.

“Since the special education audit was first made public in June 1996,” noted Las Vegas Sun reporter Teresa Hinds, “school district administrators have dismissed as inaccurate many of the audit findings. But comparisons with state and federal complaints show that the school district was put on notice for breaking state and federal laws as far back as 1991.”

Those laws include the federal Individuals with Disabilities Education Act (IDEA), the Code of Federal Regulations, and Section 504 of the Rehabilitation Act of 1973 — as well as various State of Nevada statutes and regulations.

The district was also ignoring its own Special Student Services Procedures Manual.

Though federal regulations require that placement decisions must be made by “a group of persons knowledgeable about the child, the meaning of the evaluation data, and the placement options,” such committees’ decisions were in at least 16 cases overridden by special-ed administrators, reported the auditors.

Oddly, CCSD’s Cram had argued that the auditors’ allegations were wrong because, he said, such overriding of committee decisions — and thus, implicitly, federal IDEA law — was allowed by a provision in the district’s Special Student Services Procedures Manual.

In fact, reported the Sun’s Hinds, no such provision in the manual actually existed.

Multiple other documented violations were reported by Hinds’ lengthy and substantive article, which remains online even today.

To any account of CCSD’s special-ed problems and transgressions of law in the mid-1990s, a very natural rejoinder exists. It is to call what was documented “ancient history,” and assert that “things are different now.”

But are they? The CCSD administration never really acknowledged responsibility for what the consultants had documented in 1995 and 1996, and while the special-ed division head was replaced, Cram himself continued as superintendent into 2000.

So what has CCSD’s special-education record been in the decades since the revelations of the mid-90s?

Nevada Journal will address that question in Part Five of this series.

Earlier in the series:

Called ‘a recipe for financial disaster’ by unhappy
public-schools groups