If you and I make a deal and, step by step, I abandon what I committed to do, are you still obligated to keep fulfilling your end of the pact?

Common sense — and basic contract law — would say no.

However, when we’re talking workers’ compensation law, in Nevada and most American states, such common sense doesn’t apply.

Legally, all across the country, the presumed basis of industrial insurance rests upon state-imposed “grand bargains” that state politicians hypothesized as having been made between employers, as a class, and representatives of employees, as a class.

Under these hypothetical “deals”,

These are the essential terms of the “bargain” — the quid pro quo — and have been the rationale for the system ever since the early 20th Century, when the U.S. Supreme Court ruled that:

Since the matter of compensation for disability or death incurred in the course of hazardous employments is of direct interest to the public as a matter affecting the common welfare, the liberty of employer and employee to agree upon such compensation as part of the terms of employment is subject to be restricted by the state police power.

However, the increasing reality is that, in the words of one attorney long active in the field, “There is no quid anymore.”

That’s because, for decades, states all across America have been unilaterally whittling away at the “quid” — the benefits due injured workers — through changes in state work-comp laws.

A well-researched investigative series by ProPublica and National Public Radio this year documented in detail the de facto attack conducted by states in recent decades on workers’ compensation benefits — effectively denying injured workers the medical and financial help that once been formally pledged to them.

The retreat of state work-comp programs from former levels of compensation has similarly been documented by a recent U.S. Department of Labor report. Increasingly, it notes, the costs of workplace accidents are being shifted to taxpayers.

“State legislatures and courts have made it increasingly difficult for injured workers to receive the payments for lost wages and medical expenses that they deserve,” observed the report.

“As a result of this cost-shifting, workers’ compensation payments cover only a small fraction (about 21 percent) of lost wages and medical costs of work injuries and illnesses; workers, their families and their private health insurance pay for nearly 63 percent of these costs, with taxpayers shouldering the remaining 16 percent.”

So drastic have the cutbacks been in some states, says the ProPublica series’ lead article, that those cuts “virtually guarantee injured workers will plummet into poverty. Workers often battle insurance companies for years to get the surgeries, prescriptions and basic help their doctors recommend.”

That latter pattern is very much present in the Silver State, Nevada Journal’s reporter has found. However, because multiple levels of opaqueness have been built into Nevada’s work-comp system, no definitive account of the scope of the problem is available to the public or to lawmakers.

One facet of the opacity — the 10-year failure of the state’s Division of Industrial Relations (DIR) to provide to the state legislature reports it mandated in the 2005 session — has been reported earlier. In addition, however, Nevada law also requires that DIR conceal from the public or from news media any enforcement correspondence it has with self-insured employers, associations of self-insured public or private employers.

The ProPublica series argues that the legislative rollbacks of benefits that have spread across the country reflect a false argument advanced by “big businesses and insurance companies” — namely that workers’ compensation costs are out of control.

“In fact,” says the series lead article, “employers are paying the lowest rates for workers’ comp insurance since the 1970s. And in 2013, insurers had their most profitable year in over a decade, bringing in a hefty 18 percent return.”

To forcefully demonstrate that multi-year decline in premiums, the series’ authors and technicians produced a remarkable interactive chart that uses authoritative data for every U.S. state, as compiled by the Oregon Department of Consumer and Business Services. The chart can be viewed here, by scrolling down to the subhead, “Employers Complain of Rising Premiums, But Workers’ Comp Is at 25-Year Low.”

This is Nevada’s chart, from an online screen capture by Nevada Journal: 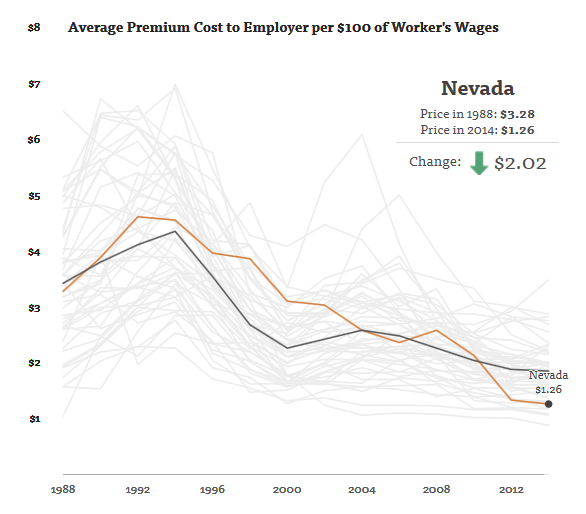 In a footnote to the chart, ProPublica notes that data from sources other than Oregon — e.g., both the federal Bureau of Labor Statistics and the National Academy of Social Insurance — also show the downward trend.

The state most often seen as Ground Zero in the legal fight emerging over this perceived rupture of the Grand Bargain is Florida.

There, Miami-Dade Circuit Judge Jorge Cueto ruled late last year that the Sunshine State has so drastically limited injured workers’ benefits that its work-comp system no longer can constitutionally require workers to be subject to it and its “exclusive remedy.” So far has the state downsized workers’ benefits, wrote the judge, that the state’s work-comp system now violates the Due Process Clause of the U.S. Constitution’s 14th Amendment, as well as multiple provisions of Florida’s Constitution.

At one time, she said, injured workers were guaranteed up to 350 weeks of temporary benefits and full medical care. Legal presumptions favored the employees, who also had unlimited choice of physicians.

Then, Florida’s 2003 legislative session changed many aspects of the law:

We no longer are able [said Wender] to get a choice of doctors for our clients, there no longer are complete medical benefits, there are $10 copayments after maximum medical improvement, and in addition the employer’s carrier has the right to apportion a claim for pre-existing conditions. We have to prove causation by a 51 percent standard, and even if we succeed in doing that, if the major contributing cause of the 51 percent is a work-related accident, 49 percent may be the responsibility of the employee for both medical and indemnity benefits.

While that decision “may not stand for a variety of reasons,” observes attorney Deborah Kohl in a LexisNexis blog, there’s a “clear takeaway for other states” — namely, “at what level has the legislature gone so far as to impinge on the social bargain and tread on due process?”

Here in the Silver State, also, that question is alive. Even before Florida passed its supposed reforms, Nevada lawmakers had unilaterally changed the state’s work-comp “deal,” taking multiple benefits away from workers. One, as in Florida, was the right to choose your own doctor.

Yet probably the most momentous change Nevada lawmakers made was their 1995 decision to give protection from worker lawsuits to insurers and third-party administrators even when the latter intentionally chose to mishandle benefit claims.

In legal terms, such intentional mishandling is called acting in “bad faith” — the term that was used in the legislative provision’s first draft. Later, the final form of the language was much more diplomatic, sidestepping entirely any expression of the intent behind the provision.

Although this decision has been repeatedly portrayed as merely part and parcel of workers’ compensation’s longstanding “no fault” and “exclusive remedy” arrangements for employers and employees both, such portrayals are false.

This decision extended the shield against lawsuits to two industries — work-comp insurers and third-party administrators — that have strong financial incentives to so repeatedly frustrate injured workers that the latter eventually give up in disgust.

Moreover, four years earlier the Nevada Supreme Court had made clear that bans on worker lawsuits against lawbreaking insurers and administrators would be something entirely new and destructive. The court made this point in its 1991 Falline v. GNLV CORP decision, which directly confronted the problem of insurer and/or third-party administrator bad-faith.

At issue was whether or not Steve Wynn’s Golden Nugget casino could be held liable for bad-faith administration of work-comp claims by its hired third-party administrator, Gibbens Company, Inc., which were detailed in the decision.

First, the court noted that it had long held that claimants could sue “the State Industrial Insurance System (SIIS) under a common law negligence theory because SIIS was a third party separate and apart from the employer.” It then concluded that “there is no rational basis for permitting such an action against SIIS, which is funded by contributions from employers, and denying the same right of action against administrators of self-insured plans which are also funded by employer.

“In both instances,” continued the court, “administrators are obligated to promptly, fairly, and in good faith, process and pay where warranted, compensation benefits to injured workers.”

The high court — noting that Nevada law already [as of 1985] “imposes liability on a self-insured employer for penalties resulting from the derelictions of the administrator/agent” — found:

The ruling further noted that Nevada’s statutory remedy would mean only a possible fine for a bad-faith lawbreaker of at most $1,000 — a sum totally inadequate to even begin to pay the medical and other costs that follow most serious industrial accidents.

“We are unwilling to expose Nevada’s injured workmen to such a hollow and illusory form of relief,” stated the court.

It added: “If the Legislature sees fit to declare the statutory scheme of fines an exclusive remedy to aggrieved workmen whose claims are denied or delayed as a result of negligence or bad faith, the Legislature may enact legislation to that end.”

In 1995, however, that was exactly what legislators proceeded to do — depriving Nevada workers of yet another common-law right.

Twenty years later, the high court’s concerns for workers have been proven prescient.

In multiple cases that have come to Nevada Journal’s attention, the state’s laws — and its administration of them — have, indeed, proven for injured workers “a hollow and illusory form of relief.”

In the next installment of this series, we’ll bore more deeply into that problem, and how it might be set straight.