Analysis: Most five-star CCSD schools earn only B’s and C’s

Bunker Elementary, for example, is a school CCSD lists as an official five-star school, but when stripped of the free focus-goal points and the district’s “hold harmless” rule, the school’s score came in at 51.82, normally equivalent to an “F.” The “hold harmless” rule was adopted, according to the district, to not “penalize” schools during the initial SPF transitional phase.

CCSD’s updated rankings report Bunker as a three-star school scoring 56 points, but the district publicly listed and promoted it as one of the district’s five-star elementary schools.

Laughlin Junior High School is another school that scored poorly on academics but was highly ranked by CCSD. The district’s raw scoring put the school at 65.73, or, with the automatic five point bonus, 70.73. However, under the “hold harmless” rule, parents of students attending the junior high school are assured the school has four-star status. Under traditional ABCDF scoring, however, the school would receive a “D.”

Laughlin Senior High School also benefitted from the district’s unique scoring procedures, earning only 57.57 points before the automatic 5-point bonus. Instead of an “F,” however, it received three stars from the district.

In fact, all four schools that requested gyms — Indian Springs, Laughlin, Moapa Valley and Virgin Valley — are four- or five-star schools that scored a “C” or worse on academics.

The district’s SPF model is based on a similar one used by Superintendent Dwight Jones during his tenure as Colorado’s Commissioner of Education. Jones recently announced his resignation from the district, telling the Board of Trustees and the public at a March 6 board meeting he needed to care for his ailing mother. March 22 will be his last day on the job.

The district’s model measures a combination of factors, from graduations rates to building climate, then adds in five free “focus goal” points, on a 100-point scale.

Every school in the district — elementary, middle and high school — was instructed to decide what it wanted to define as its “focus goal,” for which it would automatically earn the five bonus points.

CCSD then assigns schools with over 80 points five-star status and those over 65 points four-star status — so long as the schools have also made Adequate Yearly Progress (AYP) under the federal No Child Left Behind Act. Having been granted an opt-out waiver to the federal act, the district in future years will no longer need to incorporate AYP factors.

According to the district’s calculations, 23 high schools accumulated enough points to earn four or five stars during the 2011-12 school year. However, when the performance of those same high schools is measured only by their earned numeric scores — omitting the district’s free bonus points, and other adjustments — seven of the schools earned A’s, three earned B’s, six earned C’s, three earned D’s and four earned F’s. 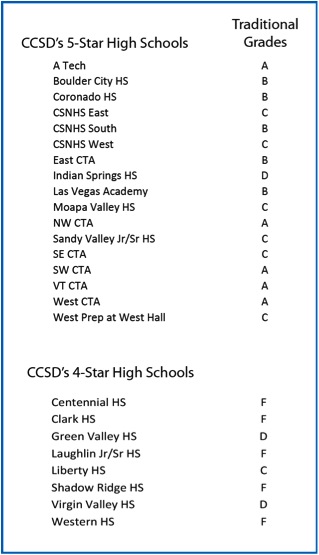 Amanda Fulkerson, chief communications officer for the district, told Nevada Journal that the “climate” and “focus goal” factors are important components in evaluating the schools.

“We look at things like daily attendance, and compile surveys from students and parents where we ask about building cleanliness, the classroom environment — things like that,” said Fulkerson.

‘Not passing means they passed’

CCSD’s high-school charts also evaluate the schools’ success producing graduates over the past two school years, but the district uses a unique way of comparing graduation rates over time.

The SPF formula allows a high school to earn various points if the graduation rate is above 65 percent, but the school can also earn points if its number of students not graduating drops by at least 10 percent.

A similar method is used for calculating the number of students passing the proficiency exams: A school earns points if it reduces the number of non-passing students by 10 percent.

As Fulkerson put it: “Not passing means they passed.”

The reason the district measures from the “no,” explained Nathan Trenholm, a coordinator with CCSD’s Assessment and Accountability office who works with the SPF data, is because the district expects a school that’s farther behind to have more students who aren’t passing, so measuring the reduction in non-passing students creates a different bar for schools to meet.

“If you’re a school that has a 70 percent ‘no,’ 10 percent of 70 is seven, so you need to reduce your ‘no’s’ by seven percent,” said Trenholm, “whereas if you’re at 50 percent, your number is five. That’s why measuring the reduction in the ‘no’ can create a higher bar for farther behind [schools].”

If the year-to-year percentage change in graduation rates is measured, 18 high schools, including some five-star schools such as Advanced Technologies Academy, had declining graduation rates.

The declining rates aren’t shown in CCSD’s data, however, due to its reduction in non-passing students measurement.

Fulkerson defended the district’s math, saying the district tries to account for as many factors as possible.

“Sometimes people don’t realize all that goes into running a school, so it’s not enough to just look at one or two numbers and say ‘this is what we need to work on,’” Fulkerson said.

“It took lots of meetings and analysis from teachers, principals, parents, and statisticians to decide what were the best ways to evaluate our schools. Is it complicated? Yes, but that’s why we made all [SPF data] available online so parents can look at their child’s school and ask questions about it.”

Keep Up vs. Catch Up

Seven elementary schools earned “A’s,” but only three of them are listed as five-star schools in CCSD’s rankings. Elizondo Elementary, for example, is only a two-star school, according to CCSD, but academically, it could be worthy of five-star status.

Trenholm explained that the district’s data is meant to be “comparative” and shouldn’t be treated as an absolute indictment of the school.

“We’re looking at how students in a particular school compare to their academic peers in another school,” Trenholm said.

Trenholm stressed that the SPF data is most important at elementary schools for its ability to show a teacher whether a student is on the right trajectory toward proficiency in math and reading. The district then puts students into two categories: “Catch Up” and “Keep Up.”

“Some students may improve their scores, but improve them at such a low rate that they could fall behind,” Trenholm said.

“If a student was proficient in his first test, he’s in the “Keep Up” category, but if the student performed slightly worse on his second test, he’d be labeled “Keep Up/No,” because he’s below the trajectory he needs to be on to stay proficient.”

Fulkerson added that the two categories, like the entire SPF itself, acts as an invaluable tool for teachers.

“A teacher can look at this information and say these are the students who need additional help in the subject areas,” Fulkerson said. “It’s so empowering as a parent to sit down and have a teacher say ‘this is the direction your child’s heading, and this is where we think we can help.’”

Correction (March 8, 2013): The original version of this story reported that 72 of the 84 five-star schools earned a “B” or worse, graded traditionally. The actual number is 71. Return to corrected paragraph.

Kyle Gillis is a reporter for Nevada Journal, a publication of the Nevada Policy Research Institute. For more in-depth reporting, visit https://nevadajournal.com/ and http://npri.org/.